TEHRAN, November 10 -Exposure to pesticides can reduce the size of bee colonies and cause the insect to become less social. 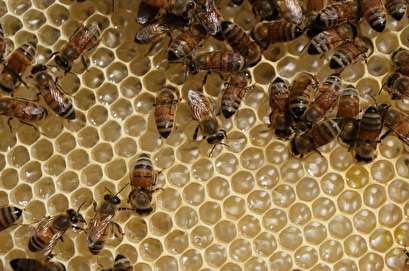 TEHRAN, Young Journalists Club (YJC) -Exposure to pesticides can reduce the size of bee colonies and cause the insect to become less social.

Researchers published those findings in the journal Science.

A team of researchers, led by Harvard University's James Crall, used a robotic bench that allowed them to study the behavior patterns of as many as a dozen bee colonies at once. They observed that after pesticide exposure, bees spent less time nursing larvae and less time socializing with other bees.

They also saw that exposure prevented the bees from building protective wax caps around their colony or warming the nest.

"These pesticides first came into use around the mid-1990s, and are now the most commonly-used class of insecticide around the globe," Crall said in a press release. "Typically, they work through seed treatment -- high concentrations are dosed on seeds, and one reason farmers and pesticide companies like these compounds is because they are taken up systemically by the plants.

"So the idea is they provide whole-plant resistance," Crall said. "But the problem is they also show up in the pollen and nectar bees are feeding on."

Over the last 10 years, Crall said, several studies have said that pesticide exposure can upset foraging habits, "but there were reasons to suspect that wasn't the whole picture."

"Foraging is only a part of what bumblebees do," Crall said. "Those studies were picking up on the important effects these compounds were having on what's going on outside the nest, but there's a whole world of really important behaviors going on inside...and that's a black box we wanted to open up a bit."

As with earlier studies, the researchers work showed differences in activity and socialization habits, with bees spending more time on the edges of the nest. But in tests, rendered the strongest results during the overnight.

Bees have a strong circadian rhythm. Crall said the researchers didn't see a statistically-observable effect during the day, at night, however, they could "see that they were crashing."

The observation suggests researcher look at effects overnight in order to properly study the effects of pesticide compounds, in addition to continuing to study whole colonies, rather than individual bees, because of the social nature of the insect.