TEHRAN, November 12 - British Foreign Secretary Jeremy Hunt, who is due in Saudi Arabia later on Monday, will question the kingdom’s rulers about the continuation of a deadly war against the people of Yemen while urging them to come clean about the murder of dissident journalist Jamal Khashoggi. 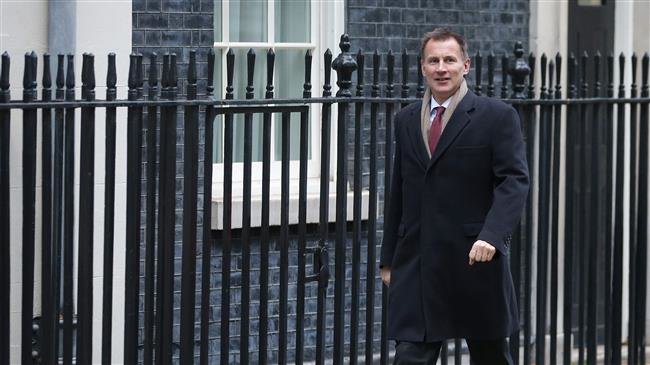 Hunt said Sunday that he will try to stop the ongoing Saudi-led military aggression against Yemen during the trip, which also includes a stop in the United Arab Emirates, one of Riyadh’s key allies in the war.

Saudi Arabia kicked off the bloodshed in Yemen over three years ago with the declared goal of removing the Houthi Ansarullah Movement from power and reinstating former fugitive President Abd Rabbuh Mansour Hadi.

The war has killed thousands of Yemeni civilians while destroying the impoverished country’s critical infrastructure, putting millions on the verge of famine and exposing them to deadly cholera outbreaks that have already consumed over 2,000 lives.

Saudi atrocities in Yemen have even prompted the US and the UK, who both provided Saudis with weapons and intelligence during the war, to join an international campaign to end the war by demanding a UN-brokered armistice.

Ignoring the calls, however, Riyadh and its regional allies have stepped up their push to capture the strategic Yemeni port city of Hudaydah to get the upper hand in any future peace talks.

“The only solution is now a political decision to set aside arms and pursue peace. Britain has a unique position, both as pen-holder [lead state for drafting decisions] at the UN security council and as a key influencer in the region, so today I am traveling to the Gulf to demand that all sides commit to this process,” said Hunt.

“We are witnessing a man made humanitarian catastrophe on our watch: now is the window to make a difference, and to get behind both the UN peace process and current UK efforts in the security council,” he added.

While in the UAE, Hunt will continue the ongoing case of Matthew Hedges, a 31-year-old British student who was detained at Dubai Airport in May on charges of spying.

Hunt's trip is the first by a UK minister since Khashoggi's murder at the Saudi consulate in Istanbul over a month ago.

After Khashoggi’s disappearance, Riyadh insisted for weeks the he had walked out of the consulate but later on it changed its account to say the journalist died in a brawl and was killed in a “rogue” operation.

Hunt said he will ask the Saudi intelligence community to step up cooperation with Turkish officials and help them get to the bottom of the issue.

"The international community remain united in horror and outrage at the brutal murder of Jamal Khashoggi one month ago. It is clearly unacceptable that the full circumstances behind his murder still remain unclear,” Hunt said ahead of the trip.

"We encourage the Saudi authorities to co-operate fully with the Turkish investigation into his death, so that we deliver justice for his family and the watching world."

Khashoggi was close friends with bin Salman before falling out of favor with him and turning into his firm critic. There are reports that bin Salman personally ordered the hit job to silence Khashoggi.