TEHRAN, November 14 - A senior Iranian diplomat has warned that the possible collapse of a historic nuclear agreement signed between Iran and major world powers in 2015 would certainly add to political complications in the Middle East. 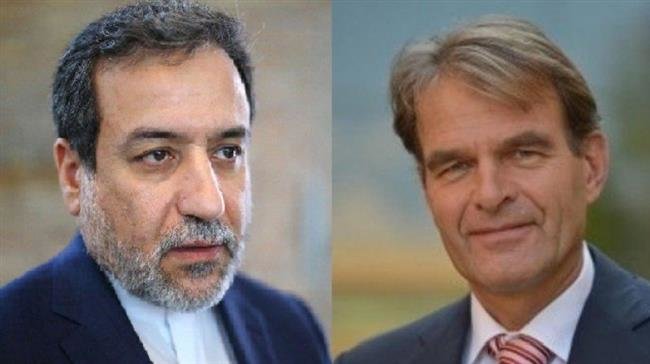 Araqchi hailed the Dutch government's support for the maintenance of the nuclear deal, officially known as the Joint Comprehensive Plan of Action (JCPOA), and its opposition to the US unilateralism.

He said the US breached the UN Security Council Resolution 2231 and encourages and even forces other countries to violate the accord through its "unilateral and illegal" move to pull out from the JCPOA.

"If the JCPOA collapses, it means the defeat of diplomacy and the dominance of bullying in the international arena and this issue will absolutely add to the political complications in the Middle East region," the senior Iranian diplomat added.

President of the United States Donald Trump withdrew Washington in May from the landmark Iran nuclear agreement, reached between Iran and the P5+1 group of countries in 2015, and decided to re-impose unilateral sanctions against Tehran.

Under the deal, Iran undertook to put limits on its nuclear program in exchange for the removal of nuclear-related sanctions.

Trump's administration announced the re-imposition of the “toughest” sanctions ever against Iran's banking and energy sectors with the aim of cutting off the country's oil sales and crucial exports.

Despite Washington's withdrawal, Iran has not left the deal yet, but stressed that the remaining signatories to the agreement have to work to offset the negative impacts of the US pullout for Iran if they wanted Tehran to remain in it.

The other parties to the JCPOA have repeatedly announced that the deal is working and should stay in place.

The International Atomic Energy Agency (IAEA) said on Monday that Iran has continued to implement all its commitments under the 2015 nuclear deal even as the United States re-imposed fresh sanctions against Tehran.

According to an IAEA's report, Iran has been complying with the restrictions to its nuclear program laid down in the JCPOA as of early November.

Elsewhere in his talks, Araqchi said the Islamic Republic's policy is based on boosting security in the Middle East.

"Despite some regional countries that have caused different problems and tension in the region by their political mistakes, Iran's policy is to maintain stability and promote security in the region," the senior Iranian diplomat added.

"This is the reason that the Islamic Republic of Iran has fought against Daesh as the most important factor behind regional instability," he pointed out.

The Dutch diplomat, for his part, said his country as a member state of the European Union and a non-permanent member of the Security Council supports the Iran nuclear deal.

Haspels added that the Netherlands firmly follows up on the implementation of a mechanism for banking exchanges.

During the meeting, Zarif and Haspels discussed the latest developments in mutual relations, particularly the expansion of economic cooperation, and regional issues, including the Syrian and Yemeni crises, as well as the JCPOA.