UN to lift sanctions on Eritrea

TEHRAN, November 14 -The UN Security Council will on Wednesday vote to lift sanctions on Eritrea following a landmark peace deal with Ethiopia and a thaw with Djibouti that have buoyed hopes for positive change in the Horn of Africa. 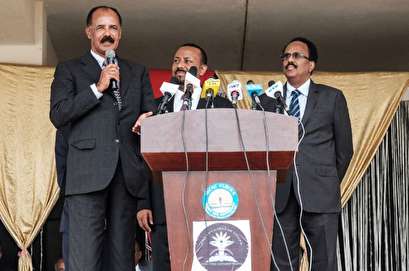 TEHRAN, Young Journalists Club (YJC) - Diplomats say they expect the council to unanimously adopt a British-drafted resolution that would lift the arms embargo and all travel bans, asset freezes and targeted sanctions on Eritrea.

The council slapped sanctions on Eritrea in 2009 for its alleged support of Al-Shabaab insurgents in Somalia, a claim Asmara has long denied.

The draft resolution acknowledges that UN monitors have "not found conclusive evidence that Eritrea supports Al-Shabaab" and declares that the sanctions and arms embargo will end on the day of the adoption of the measure.

Eritrea and Ethiopia signed a peace deal in July that ended two decades of hostility and led to friendlier relations with Djibouti, shoring up prospects for stability in the Horn of Africa.

The draft resolution calls on Eritrea and Djibouti to continue efforts to settle a 2008 border dispute and asks Asmara to release information concerning Djiboutian soldiers missing in clashes a decade ago.