TEHRAN, November 14 - Iranian Defense Minister Brigadier General Amir Hatami warned the enemies that any aerial military action against the country will draw such a crushing response that the perpetrators would regret it. 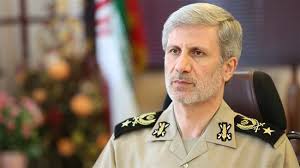 TEHRAN, Young Journalists Club (YJC) -  “Today, the space (technology) is not monopolized by the enemies (any more), and the Islamic Republic Establishment has gained such might (in this sphere) that if an invader makes a move against Islamic Iran in the space, it will face such a response that would regret its action,” the Iranian defense minister said in a gathering of military personnel on Tuesday.

Highlighting Iran’s progress in the military industry despite foreign sanctions over the past four decades, General Hatami said Iran has acquired a high level of deterrent power in the aerospace technology, ground combat tactics, naval industry, communications and radars, in a way that the country has become a world power in those fields.

In comments in May 2017, Leader of the Islamic Revolution Ayatollah Seyed Ali Khamenei cautioned the adversaries about the “harsh reaction” they will have to suffer in case of any offense against Iran, stressing that the era of hit and run is over.

“The enemies should know that if they come up with the idea of an act of aggression against Iran, they will face a harsh reaction,” Ayatollah Khamenei said, reminding the enemies that they might begin a war against Iran, but the decision to end it would not be theirs.