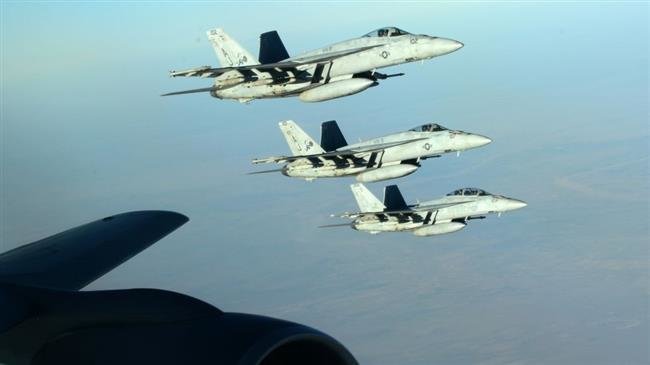 There were no immediate reports about possible casualties and the extent of damage caused.

Cluster bombs are banned under the Convention on Cluster Munitions (CCM), an international treaty that addresses the humanitarian consequences and unacceptable harm caused to civilians by cluster munitions through a categorical prohibition and a framework for action.

On Tuesday, the Syrian Ministry of Foreign Affairs and Expatriates condemned the recent airstrike by the US-led coalition against the eastern town of al-Shaafah, which left more than 60 people killed and injured, arguing that the massacre clearly points to the fact that members of the military alliance have no respect for moral values, international rules and regulations besides the lives of innocent civilians.

The ministry, in two separate letters, addressed to United Nations Secretary General Antonio Guterres and the rotating president of the UN Security Council Ma Zhaoxu, called on the Security Council to assume its responsibilities and to stop US-led aerial assaults.

It also asked the world body to recommend an international, independent and impartial mechanism to investigate the crimes being perpetrated by the US-led coalition.

The letters noted that the coalition is deliberately targeting Syria civilians and making use of internationally banned weapons, including white phosphorus bombs, in Syria.

The Syrian foreign ministry stressed that the US-led coalition airstrikes were meant to kill as many Syrian people as possible, prolong the ongoing Syrian conflict, destroy the country’s infrastructure and undermine its sovereignty and territorial integrity in flagrant violation of all United Nations Security Council resolutions on Syria.

The letters concluded that the embarrassing silence of the Security Council has encouraged the US-led coalition to kill more Syrian civilians and destroy their properties.

Share to
Related News
‘Daesh suspected of killing around 100 Nigerian soldiers’
More US kids get paralyzing illness, cause still unknown
VP Pence said to be gearing up for all-out Cold War with China unless it bows to all US demands
Iraq rejects US deadline to halt Iran gas imports
Tags
us ، people ، bomb
Your Comment