TEHRAN, November 13 -Hundreds of migrants from Central America traveling through Mexico to seek asylum in the United States have reached the Mexican border city of Tijuana, which sits across the border from San Diego, California. 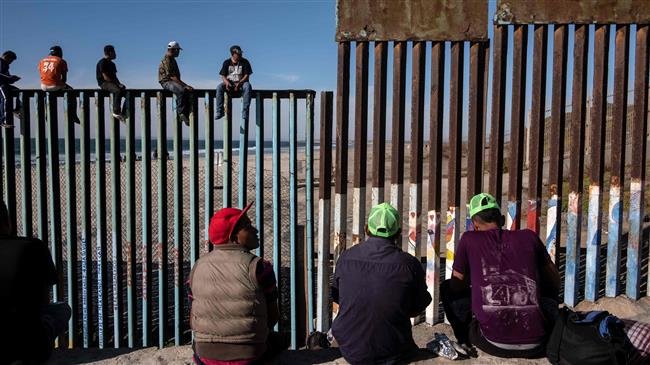 TEHRAN, Young Journalists Club (YJC) -A group of about 350 migrants that had split off from the main caravan arrived Tuesday morning, many with small children, according to local authorities and migrant advocates.

The migrants had grown impatient with the caravan's progress, preferring to forego the security of traveling in numbers to more quickly file their asylum claims in the United States.

But an estimated 5,000 migrants spent Monday night in the central Mexican city of Guadalajara, before enduring another round of frustration during their attempts to move farther north on Tuesday.

The state government of Jalisco organized buses to take the migrants to the next state to the north, Nayarit, where they expected to have other buses waiting for them to continue the trek north, according to a statement from Pueblo Sin Fronteras, a migrant advocacy group traveling with the caravan.

"This is a clear decision by the Jalisco state government to get us out of Guadalajara," Pueblo Sin Fronteras said in a statement. "It puts at risk the physical integrity, security and health of thousands of families with children, who are being left in the darkness of the early morning."

Despite the new round of difficulties, Guadalajara marked the halfway milestone for the caravan, which set out October 12 from Honduras, and has traveled roughly 1,400 miles (2253 km).

The pace has accelerated as the group enters northern Mexico, sometimes traveling more than 100 miles a day.

US Defense Secretary Jim Mattis said he would travel to the border with Mexico on Wednesday following the deployment of thousands of troops to bolster President Donald Trump's efforts to crack down on illegal immigration.

It will be Mattis' first visit to the border since the military announced that over 7,000 U.S. troops would go to or near the border with Mexico.

on Friday, Trump signed an immigration order that will ban migrants who cross the US border with Mexico illegally from claiming asylum.

Human rights groups and immigrant advocates denounced the move, saying it violated existing US law that allows people fleeing persecution and violence in their home countries to apply for asylum regardless of whether they enter illegally or not.

Trump has made his hard-line stance on immigration an integral part of his presidency and a key issue ahead of Tuesday’s midterm elections.