TEHRAN, November 15 - Sri Lanka's parliament descended into chaos on Thursday with MPs swinging punches and throwing projectiles a day after legislators voted the "purported" prime minister out of office. 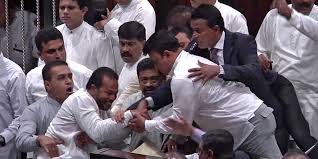 However, these moves were suspended by the Supreme Court on Tuesday pending an investigation.

Thursday's routine parliament session, the first since Rajapakse and his disputed administration were deposed, began with the speaker announcing that the country now had no government.

The vote ousting Rajapakse, a divisive former president and political bruiser, and the Supreme Court's rulings were a major boost to Wickremesinghe.

The four-times prime minister, popular with Western countries for his economic reforms, had refused to leave his official residence after being fired by the president.

Addressing parliament Thursday as an ordinary member, Rajapakse asked the house to end the crisis by holding a national election.

Sirisena, who is vested with constitutional powers to induct a new prime minister and a cabinet of ministers, was yet to take note of Wednesday's no-confidence motion.

On Thursday, he accused Jayasuriya of violating legislative traditions, saying the signatures of 122 legislators who opposed Rajapakse had not been certified as genuine.

The president also rejected the position that he did not have the power to sack Wickremesinghe and replace him with Rajapakse. Day-to-day administration in Sri Lanka remains paralysed as the crisis drags on.