TEHRAN, November 18 - Iran says it is discussing a plan with Iraq to switch to Dinar in trade instead of the US dollar. 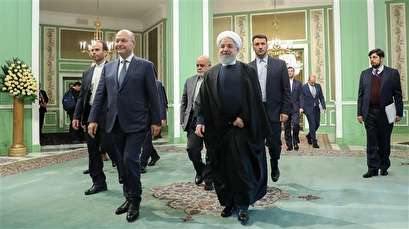 TEHRAN, Young Journalists Club (YJC) - The announcement was made by Iran’s Ambassador Iraj Masjedi who said the plan had been devised in response to recent US sanctions that restricted Iran’s access to the greenback.

“Considering the problems that have emerged in dollar-based banking transactions, a joint proposal between Iran and Iraq is using Iraq’s Dinar in trade,” said Masjedi.

An alternative plan, he added, would be to use barter mechanisms to carry out imports and exports with Iraq.

The official was speaking as Iraq’s President Barham Salih was visiting Tehran on his first trip to the Islamic Republic.

President Salih told his Iranian counterpart Hassan Rouhani during a press conference that Baghdad was determined to boost trade with Tehran. He made the announcement only days after his country rejected a US deadline to stop importing Iranian gas under new American sanctions.

“I have come here today with a clear message from Baghdad: We appreciate the importance of relations with Iran and these economic, cultural and political relations are rooted in history,” Salih said in a joint news conference with Rouhani.
Masjedi further emphasized that the current level of trade between Iran and Iraq stood at $12 billion, stressing that serious plans were on agenda to promote this to as high as $20 billion.

He acknowledged that Iraq had come under pressure from the US over doing business with Iran after the return of the sanctions and underscored comments by Iraqi officials that Baghdad would not toe Washington’s line as a sign that the country could not afford to cut trade ties with its eastern neighbor.

Masjedi emphasized. “If exports of these to Iraq are stopped, there will be problems not only for Iran but also for the Iraqis, as well.”

The port of Basra in southern Iraq was hit by violent protests, which spread to other cities this summer, partly because of a halt of imports of electricity from Iran.

Earlier this month, Iraq’s former prime minister and leader of the al-Wataniya faction in parliament Ayad Allawi warned that new US sanctions on Iran would have deep impact on the Iraqi economy.

On Tuesday, head of Iraqi Chambers of Commerce Jafar Rasul Hamdani said that despite US sanctions against Iran, the two countries have sharply increased their trade exchanges in recent months.

“In the first six months of this year, the volume of exchanges rose from $4 billion to $6.4 billion compared to the same period in 2017,” he told Iran’s state news agency IRNA.