TEHRAN, November 24 -Moscow has warned Western and European countries over the escalation of tensions in the Sea of Azov that borders Russia and Ukraine, saying the issue is being used as a “pretext” to pressure Russia and impose further sanctions on the country. 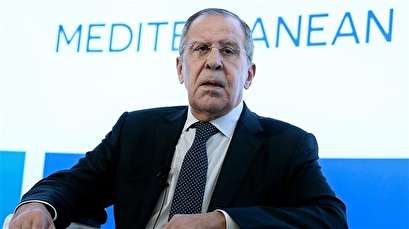 TEHRAN, Young Journalists Club (YJC) -Moscow has warned Western and European countries over the escalation of tensions in the Sea of Azov that borders Russia and Ukraine, saying the issue is being used as a “pretext” to pressure Russia and impose further sanctions on the country.

Russian Foreign Minister Sergei Lavrov made the remarks during a joint press conference with his Italian counterpart Enzo Moavero Milanesi in Rome on Friday.

Tensions between Russia and Ukraine in the Sea of Azov – a strategic ocean route linked to the Black Sea by the narrow Strait of Kerch – began since Russia built a bridge, known as the Kerch Strait Bridge, linking the Crimean Peninsula with the mainland.

The dispute escalated earlier this year after Kiev detained two Russian ships for port calls in Crimea, which rejoined Russia in a 2014 referendum.

Moscow described the move as "maritime terrorism" and increased patrols off its Azov coast, prompting Kiev to accuse Russia of illegal searches.

"Our European colleagues who are now worried about a somewhat-fabricated issue didn't voice any concerns when the Ukrainian side acted illegally by seizing Russian vessels, keeping their crews under arrest and planning to auction off those vessels. As I just said, at that time no one from those who are now worried about the Azov Sea issue, voiced any concerns. That's why I see no explanations other than an attempt to invent yet another pretext for putting pressure on the Russian Federation,” Lavrov said.

The top Russian diplomat stressed that Moscow was forced to expand its military presence in the Kerch Strait due to threats coming from Ukraine to blow up the Crimean Bridge.

“I also want to remind [you] that the Kerch Strait is not a strait governed by international law; it's a Russian strait. We had to increase our border security and military presence there, after Ukrainian officials threatened several times to blow up the Crimean Bridge over the Kerch Strait. By the way, we have heard no reaction to these threats from our Western partners who are now so concerned over the absolutely legitimate actions of the Russian authorities in the Sea of Azov," Lavrov noted.

Russia not to 'beg' West to lift sanctions

During the joint press conference, Lavrov said the Kremlin was not going to “beg” European countries to lift sanctions on Moscow, adding that his country considered the sanctions to be "a completely politicized decision," and in breach of human rights agreements.

"We treat sanctions as a completely politicized decision, as in case of Crimea it punishes people for their free will. It's a serious violation of the Convention on Human Rights and other agreements on human rights...On the other hand, we understand that sanctions are our reality. We are not the ones who started it all. And we will not beg our colleagues in Europe or wherever to lift them," the top Russian diplomat said.

Russian Deputy Foreign Minister Grigory Karasin also said on Thursday that the controversy around the Sea of ​​Azov had been “deliberately” created by Kiev and its Western backers seeking to exert pressure on Moscow.

"The Azov topic is being circulated in the information space deliberately and laboriously. The current Kiev regime, in coordination with its foreign patrons, has found another anti-Russian theme created out of thin air… But this was expected as the Crimea issue is no longer perceived as a hot topic and an instrument of applying pressure on Russia, so they simply need to find brilliant fresh topics," Karasin said in an interview with Russia's Kommersant newspaper.

"In fact, the situation in this region is not particularly interesting for our so-called Western partners. What's really important for them is to find a new pretext for attacking Russia and for tightening anti-Russian sanctions," he added.

Karasin also denounced as “blatant lies” recent claims about detentions of foreign vessels by Russia in the Sea of Azov, allegedly lasting for multiple days.

"Claims about hours-long or even multiple-day detentions of vessels are blatant lies ... Our border guards are working to ensure that the channel works smoothly and without disruption both from the Black Sea side and from the side of the Sea of Azov ... There is no talk about any deliberate detentions. All this has been made up in Kiev, Washington and Brussels," he noted.

The required checks by the Russian border guards in the Sea of Azov are held only at the entrance to the Kerch Strait and do not usually exceed three hours, according to the Russian deputy foreign minister.

Longer checks could only be caused by weather conditions or specific security requirements, Karasin added.

A former Ukrainian military official said the blocking of ships in the Sea of Azov could prompt the West to impose further sanctions on Russia and lead to devastating consequences.

Former Ukrainian lieutenant-general Igor Romanenko said a "large-scale war" was possible if Moscow continued to "aggravate the situation" in the Sea of Azov by conducting invasive inspections and seizing fishing ships.

Romanenko also said that Ukraine would not "sit idle" and would "defend their positions" if necessary.

The Ukrainian ex-military official, however, said Kiev should be wary about resorting to military action because Russia has a superior army and “we will not be able to answer.”

EU foreign policy chief Federica Mogherini said after a meeting of the Council of the European Union on November 19 that foreign ministers from the 28-member bloc had expressed concern over the situation in the Sea of Azov and discussed possible measures in this respect.

The tense situation in the Sea of Azov comes amid the backdrop of a long-running armed conflict between Kiev troops and pro-Russia forces in eastern Ukraine.

The armed conflict erupted in Ukraine following the overthrow of pro-Russian president Viktor Yanukovych in February 2014, and intensified after people in the Black Sea peninsula of Crimea voted for reunification with the Russian Federation in a referendum in March 2014.

The West brands the reunification as annexation of the territory by Russia. Moscow denies any involvement in the conflict.

Armed confrontation between the pro-Russia forces and the Ukrainian military has killed more than 10,000 people, according to the United Nations.