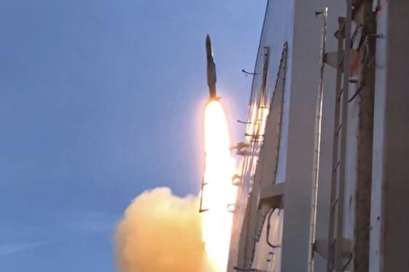 The Ticonderoga-class cruiser USS Leyte Gulf and Arleigh Burke-class destroyers USS Bainbridge, USS Mason and USS Nitze all engaged in the LFWAP, which is more intensive and involves more coordination between ships than a standard missile exercise.

"Having previously been on the exercise-development side of LFWAP, as the operational commander I'm extremely pleased to see how our CRUDES ships flexed their capabilities and strengthened how we operate as a team -- as opposed to individual units -- throughout this event," commander of CSG 12 Rear Adm. John Wade said in a release.

"The LFWAP exercise is extremely valuable training for the entire strike group, and I look forward to incorporating lessons learned into our operations and seeing the result of the hard work these ships put in to increase our lethality during future missions," Wade said.

Over 80 LFWAPs have been conducted over the last two years involving multiple surface combatants coordinating their fires. The Ticonderoga-class and Arleigh Burke-class are equipped with the Aegis Weapon System, which allows networking of air-defense sensors, target acquisition and missile launches.

The Standard Missile 2 is the primary long-range surface-to-air missile of the U.S. Navy. It is deployed on the Aegis Weapon System-equipped Ticonderoga-class Arleigh Burke-class destroyers using the Mk-41 Vertical Launch System. The SM-2 is in service with 15 allied navies on a variety of ship classes.

The Aegis Weapons System can automatically track and engage dozens of targets at once using the SM-2 and other Standard variants. The SM-2 Block III has a range of over 100 miles, carries a high-explosive fragmentation proximity warhead and is guided by inertial navigation, AWS mid-course corrections from the launching ship and semi-active radar.

A upgraded version of the SM-2, the SM-6 Extended Range, includes an active-seeker radar, longer range, and improved ability to engage surface targets. It can also engage incoming ballistic missiles in their terminal descent phase.