TEHRAN, November 24 -"Our work demonstrates that the thickness of the neocortex governs not only the anatomical structure of neurons, but also their electrical properties," said researcher Lee Fletcher. 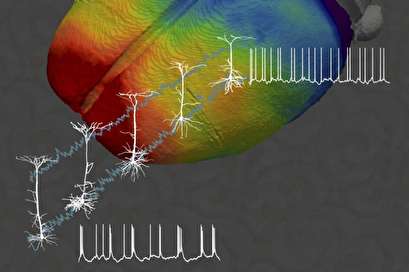 TEHRAN, Young Journalists Club (YJC) -"Our work demonstrates that the thickness of the neocortex governs not only the anatomical structure of neurons, but also their electrical properties," said researcher Lee Fletcher.

How neurons process information is dependent on their positioning within the cortex, according to a new study by researchers at the University of Queensland.

Until now, neuroscientists agreed the microcircuits of neurons found in the brain's outermost layer, the cortex, functioned and interacted in a standardized way. Scientists thought the miniature circuits were more or less all the same.

But some researchers were skeptical. To find out if the same types of neurons performed the same functions, regardless of their location, scientists at the University of Queensland set out to measure the influence of cortex's structural characteristics on neuronal patterns.

Further investigation showed the thickness of the cortex alters the shape of individual neurons. In thicker parts of the cortex, neurons are elongated.

When scientists looked at how neurons with different lengths worked, they found their shape altered the way the neurons process information.

To interpret information, neurons most not only receive information related to sensory experiences, they must also compare those inputs to an internally generated model of the world. Thus, some neurons must be able process two sets of inputs.

Tests showed how a neuron processed information was dependent on its position within the cortex.

"It turns out that they work quite differently," Queensland professor Stephen Williams said in a news release. "Electrically they're even more distinct than we thought."

Researchers described their discovery this week in the journal Neuron.

"Our work demonstrates that the thickness of the neocortex governs not only the anatomical structure of neurons, but also their electrical properties," researcher Lee Fletcher said. "The findings reveal the complexity of computational strategies employed in neocortex, and suggests the neocortex is composed of computationally flexible circuits."