TEHRAN, November 27 - Mexico deported scores of Central American migrants arrested after hundreds forced their way through a Mexican police blockade and headed for the United States but were met with tear gas and rubber bullets. 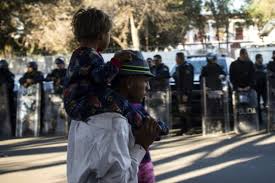 TEHRAN, Young Journalists Club (YJC) - Around 500 men, women and children, part of a caravan of roughly 5,000 mainly Hondurans who have been trekking toward the US for weeks, scrambled over a rusted metal fence and surged into a concrete riverbed toward San Diego on Sunday.

The group was stopped by a chain-link fence topped with barbed wire and US Border Patrol agents firing tear gas and rubber bullets. At least one man was wounded.

Chief Patrol Agent Rodney Scott told CNN that "numerous" migrants -- mainly men -- had made it across, however, and 42 of them were arrested.

Mexico's National Institute of Migration Commissioner Gerardo Garcia confirmed the 98 arrests on his country's side, saying there were "instigators" in the migrant caravan pushing people to illegally cross the border.

The incident was the most serious flashpoint in a weeks-long crisis that US President Donald Trump used to drum up support in this month's midterm elections.

Trump hit out again by threatening a permanent closure of the frontier, and defended the use of tear gas by US border patrol, saying it was "very safe."

"They had to use (it) because they were being rushed by some very tough people and they used tear gas and here's the bottom line: nobody's coming into our country unless they come in legally," Trump told reporters.

"The tear gas is a very minor form of the tear gas itself. It's very safe," he later added.
Mexico sent a diplomatic note requesting that US authorities "conduct a thorough investigation of the events during which non-lethal US weapons were used in Mexico."