TEHRAN, November 27 - Iran and the European Union have held the fourth meeting of the high-level political dialogue in the Belgian capital, Brussels. 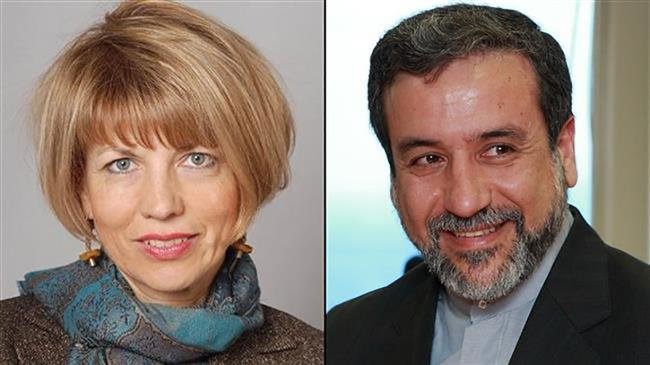 TEHRAN, Young Journalists Club (YJC) - According to a press release issued on Tuesday by the official website of the European Union, the meeting was co-chaired by Iranian Deputy Foreign Minister for Political Affairs Abbas Araqchi and Secretary General of the European External Action Service (EEAS) Helga Maria Schmid on Monday.

It added that the meeting was part of the regular exchanges between Iran and the 28-nation bloc.

According to the official Islamic Republic News Agency (IRNA), Araqchi stressed the importance of preserving the multilateral nuclear agreement, officially known as the Joint Comprehensive Plan of Action (JCPOA), to promote regional and international peace and security.

He said the International Atomic Energy Agency (IAEA) once again reaffirmed the Islamic Republic's full commitment to its undertakings under the nuclear deal.

In its latest report on November 12, the UN nuclear agency said Iran has continued to implement all its commitments under the 2015 nuclear deal it signed with major global powers even as the United States re-imposed fresh sanctions against Tehran.

Iran has been complying with the restrictions to its nuclear program laid down in the nuclear deal, the IAEA added.

Araqchi further urged acceleration in the effective implementation of the JCPOA by its remaining signatories, particularly the European side, after the illegal US withdrawal from the agreement.

"Any procrastination in the fulfillment of the obligations will pose serious challenges to this important diplomatic achievement for the international community and the Islamic Republic of Iran will make a decision based on its independence and interests in that case," the senior Iranian diplomat pointed out.

US President Donald Trump withdrew his country in May from the Iran nuclear deal, reached between Iran and six major powers -- the United States, Britain, France, Germany, Russia and China -- and decided to re-impose unilateral sanctions against Tehran.

Under the deal, Tehran agreed to put limits on its nuclear program in exchange for the removal of nuclear-related sanctions.

Iran has not left the landmark nuclear deal yet, but stressed that the remaining signatories to the agreement have to work to offset the negative impacts of the US pullout for Iran if they wanted Tehran to remain in it.

The Tuesday EU press release further said discussions on human rights were also held, as an integral part of EU-Iran political dialogue and as a continuation of regular exchanges held in November last year and in February 2016.

It noted that the EEAS Secretary General Schmid also participated in the third two-day EU-Iran High Level Seminar on International Nuclear Cooperation, which opened in Brussels on Monday.

The seminar focused on aspects of civil nuclear cooperation in line with the JCPOA, it said, adding the EU continues to fully support the deal's implementation.

Addressing the seminar on Monday, Iran's nuclear chief criticized the US administration's efforts to prevent the implementation of the historic nuclear agreement through exerting pressure on other countries to make them pursue Washington's policies vis-a-vis the deal.

"This unconstructive US approach shows that this country, as a permanent member of the [United Nations] Security Council, is not committed to its international obligations," Head of the Atomic Energy Organization of Iran (AEOI) Ali Akbar Salehi said.