TEHRAN, November 28 -A 16-year-old boy in Britain is to be charged with assault following an alleged “racist” attack on Jamal, a 15-year-old Syrian refugee at a school in the English town of Huddersfield, UK police said. 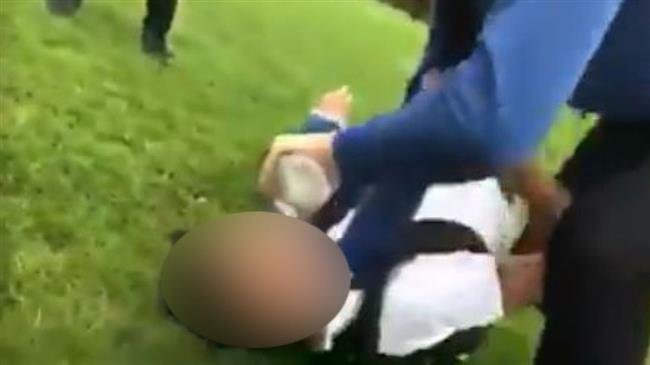 TEHRAN, Young Journalists Club (YJC) -“Regarding the assault on a 15-year-old youth in Almondbury, which featured in a video posted on social media yesterday and has been widely reported in the media, a 16-year-old youth has been interviewed and reported for summons, for an offense of assault. He will appear at Youth Court in due course,” West Yorkshire Police said in a statement on Wednesday.

The incident is said to have occurred on 25th October this year at Huddersfield’s Almondbury Community School. The case has been subject to a thorough investigation since it was reported to police the day after.

The video of the attack purportedly shows Jamal, who already had one arm in a cast, being slammed to the ground in the school during a chokehold by another boy, who then says, “I’ll drown you” while forcing water into Jamal’s mouth in a “waterboarding” style.

Despite a large crowd gathering, Jamal receives no help and walks home alone after the attack stops.

However, after the video went viral, local Huddersfield residents identified the bully and leaked his details. Family members of the boy alleged to be the attacker have also been identified.

Jamal’s family has received online death threats since and police were sent to the home of the alleged victim after his details were leaked on Tuesday.

The local MP for Huddersfield, Barry Sheerman, said he has been supporting Jamal and his family since the story broke.

“Video of assault against one of my constituents absolutely shocking. Have been supporting the family since it was first brought to my attention. Understand from council that the school have taken strong action. Will be following up to ensure all available support is being given!” read a tweet by Sheerman.

More than £30,000 has been raised in sympathy for Jamal as part of an online campaign to draw attention to the plight of the boy and his family.

The online crowdfunding page was launched late on Tuesday and hundreds of concerned well-wishers have donated in a rapid response time.

“After seeing the video of Jamal being bullied I had an idea of setting up a Go Fund Me page for Jamal and his family,” said Mohammed Tahir, the man behind setting up the page, adding, “I hope we can improve the quality of their life and put a smile on their faces.”

According to Tahir’s website, Jamal’s younger sister has also been a victim of bullying in the UK.