TEHRAN, December 24 - US lawmakers headed home for Christmas leaving the government partially shut for a third day Monday in an impasse over President Donald Trump's demand for border wall funding, a standoff which the White House budget director said may continue until a new Congress takes over in January. 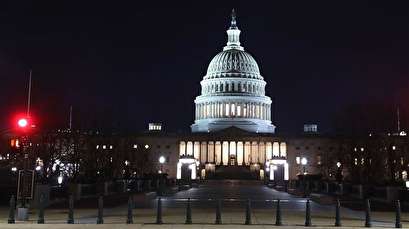 TEHRAN, Young Journalists Club (YJC) -US lawmakers headed home for Christmas leaving the government partially shut for a third day Monday in an impasse over President Donald Trump's demand for border wall funding, a standoff which the White House budget director said may continue until a new Congress takes over in January.

The shutdown adds to uncertainties from Washington which have spooked global stock markets, and capped a tumultuous week in which Defense Secretary Jim Mattis resigned over Trump's foreign policies.

More than 400,000 federal employees are reporting to their jobs on Monday but won't get their salaries, while nearly 400,000 others "will be locked out of work with no pay," the American Federation of Government Employees union said.

"No private business or company would be permitted to impose on or disrupt the lives of their employees in such a manner," the Federation said in letters to the Senate and House of Representatives.

About three-quarters of the government, including the military, is fully funded through September 2019 but the shutdown forced several other major agencies to cease operations from Saturday.

A deal to end the funding shortfall appears a distant prospect as Congress adjourned on the weekend for Christmas.

"It's very possible that this shutdown will go beyond the 28th and into the new Congress" which takes its seat in early January, White House budget director Mick Mulvaney said.

But while trying to pin the blame on opposition Democrats, Mulvaney, speaking on "Fox News Sunday," acknowledged that Trump's adamant stance on the wall played a role.

"This is what Washington looks like when you have a president who refuses to sort of go along to get along," Mulvaney said.

It is the third government shutdown of the year, even though Trump's Republican Party still controls both the House of Representatives and the Senate, but it comes as even Trump's closest Republican allies begin to question some of his policy stances.

Democrats will take control of the House on January 3, giving them greater leverage in the shutdown talks.

Trump canceled his holiday vacation to Florida due to the budget wrangling.

The president has dug in on his demand for $5 billion for the border wall, a signature campaign promise which he says would help curb illegal immigration and crime.

"The only way to stop drugs, gangs, human trafficking, criminal elements and much else from coming into our Country is with a Wall or Barrier," he said early Sunday on Twitter, before repeating essentially the same message in a tweet at the end of the day.

"It really is in the president's hands to decide. He says it's an issue of border security. I think we know better. It's an issue of his own political insecurity," Dick Durbin, the second-highest ranking Senate Democrat, said on NBC's "Meet the Press."

"When the right wingers start screaming at him he just backs off and dissembles in front of us. We now have reached a depth of dysfunction that I've never seen in Washington."

The outlines of any resolution to the dispute were hard to discern.

"The Democrats offered us $1.6 billion a couple weeks ago, then they offered the president $1.3 billion this week" for border security, said Mulvaney, who is to become Trump's acting chief of staff in January. "That's a negotiation that seems like it's going in the wrong direction."

He was speaking on ABC's "This Week."

Senator Chuck Schumer, the Senate minority leader, blamed a "remarkable two-week temper tantrum" by the president, who he said could reopen the government if he would "abandon the wall."

Even some Republicans expressed consternation over what they dubbed an avoidable crisis.

"This is something that is unnecessary. It's a spectacle and, candidly, it's juvenile," said Corker, speaking in his final days before stepping down from Congress.

"This is a made-up fight so that the president can look like he's fighting."

Corker suggested that a deal could be reached if Trump were prepared to give ground on the Democrats' demand to protect the status of the "Dreamers" -- Latinos who, as children, arrived illegally in the United States with their parents.

Mulvaney said Trump was "willing to discuss a larger immigration solution," but that citizenship for the "Dreamers" was not a popular idea among many Republicans.