TEHRAN, Jan 4 -US manufacturing activity slowed sharply to a two-year low in December amid a plunge in new orders and hiring at factories, suggesting the economy was probably not immune to slowing growth in China and Europe. 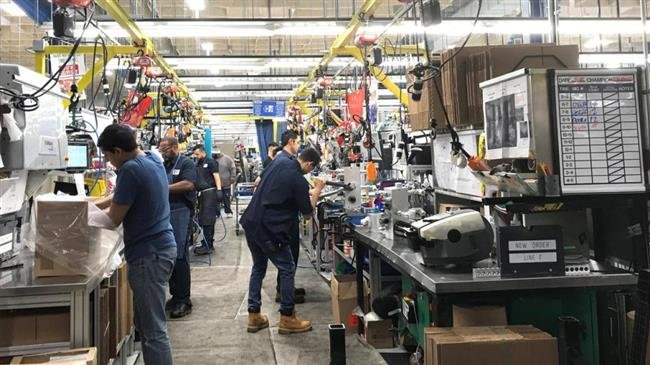 TEHRAN, Young Journalists Club (YJC) -The Institute for Supply Management (ISM) survey published on Thursday offered a downbeat assessment of the manufacturing sector, with almost all components declining last month. Concerns about the economy’s health are escalating despite the labor market remaining strong.

“The economy is just going to be spinning its wheels with subpar growth in 2019 if the purchasing managers report is to be believed,” said Chris Rupkey, chief economist at MUFG in New York. “New orders have dried up and this will take a toll on business investment and growth in 2019.”

The Institute for Supply Management (ISM) said its index of national factory activity tumbled 5.2 points to 54.1 last month, the lowest reading since November 2016.

The drop was the largest since October 2008, when the economy was in the throes of a recession. A reading above 50 in the ISM index indicates an expansion in manufacturing, which accounts for about 12 percent of the US economy.

The ISM said that demand had “softened.” It said while consumption continued to strengthen, with production and employment still expanding, this was “at much lower levels compared to prior periods.”

The ISM’s new orders sub-index plunged 11 points to 51.1 last month, the lowest reading since August 2016. The survey’s factory employment measure dropped to 56.2 in December from 58.4 in the prior month.

Tariffs imposed by the Trump administration on steel and aluminum imports as well as a range of Chinese goods are hurting manufacturers. Transportation equipment manufacturers said “customer demand continues to decrease due to concerns about the economy and tariffs.”

Machinery makers complained that “the ongoing open issues with tariffs between US and China are causing longer-term concerns about costs and sourcing strategies for our manufacturing operations.” Computer and electronic product manufacturers said “growth appears to have stopped.”

US President Donald Trump has defended the duties as necessary to protect American industries from what he says is unfair foreign competition. The White House’s protectionism has lead to a trade war with China and tit-for-tat tariffs with other trading partners, including the European Union, Canada and Mexico.

In addition to the tariffs, which have raised input costs for manufacturers, factory activity is also being undercut by a strong dollar, a shortage of skilled workers, a fading fiscal stimulus and slowing growth in economies like China.

Data this week showed factory activity weakened across much of Europe and Aecosia in December, with Chinese manufacturing contracting for the first time in 19 months. Apple (AAPL.O) on Wednesday cut its sales forecast for its quarter ending in December, citing slowing iPhone sales in China.

US stocks extended losses on the weak ISM survey, with the Dow Jones Industrial Average .DJI falling more than 600 points at one point. The dollar dropped against a basket of currencies, while U.S. Treasury yields fell.

The sharp stock market sell-off has raised the specter of a significant slowdown in growth this year, though economists see no recession. Some economists believe that the resulting tightening in financial market conditions could discourage the Federal Reserve from further raising interest rates this year.

The Fed increased borrowing costs last month for the fourth time in 2018, but forecast fewer rate hikes this year and signaled its tightening cycle is nearing an end in the face of financial market volatility and slowing global growth.