Iran Navy to send flotilla to Atlantic on 5-month mission

TEHRAN, Jan 5 - Iran Navy says it is to dispatch a flotilla, including the country’s most advanced destroyer, to the Atlantic Ocean on a five-month mission. 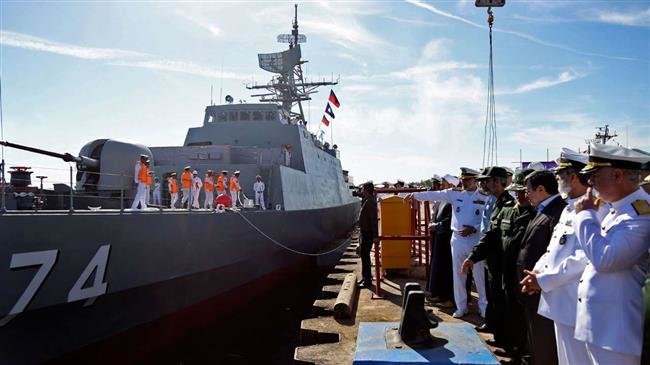 TEHRAN, Young Journalists Club (YJC) - The fleet will depart for the waters early next year on the Iranian calendar, which begins on March 21, Rear-Admiral Touraj Hassani-Moqaddam, the Navy’s deputy commander told IRNA on Friday.

“The mission will take place in line with the order issued by the chain of command,” he noted, adding that the fleet will be going around the globe to reach the Atlantic.

“[The course towards] the Atlantic Ocean is a long one, and the Iranian naval group’s mission in the ocean could last for up to five months,” Hassani-Moqaddam added.

“Iranian helicopter-carrying destroyer Sahand is going to be one of the vessels to be included in the group,” he said.

Iran launched the combat vessel, which has radar-evading stealth properties and can sustain drawn-out voyages without resupply on December 1.

Separately, Fars News Agency cited various Navy commanders and authorities as saying that the Atlantic mission is also to recruit the Khark logistical vessel. The ship, which is the largest one of its kind in Western Asia, has been fitted with enhanced propulsion and navigation capabilities. It previously joined the Navy’s missions in the Pacific and the Gulf of Aden.

Hassani-Moqaddam said a naval group belonging to the force was currently operating in the Gulf and the Indian Ocean.

The mission, he said, interacts with its international counterparts to help provide security for shipping routes in the high seas, adding that the previous mission dispatched to the Gulf had managed to rescue a foreign vessel from pirate attack.

The official said the Navy would maintain constant presence in the international waters to “execute the decrees issued by the Commander-in-Chief (Leader of the Islamic Revolution Ayatollah Seyyed Ali Khamenei), preserve and secure the Islamic Republic’s interests in waters afar, hoist the country’s flag [in the international waters], and negate the Iranophobia project.”

Also, the presence seeks to send across the message of peace and friendship, and assure that the country maintains intelligence command over the expanded operating range of its strategic naval forces, he added.

The Navy has sent 59 naval missions to the high seas over the past 10 years, mostly to the Gulf of Aden, with the primary aim of confronting piracy. Its fleets have also visited the Pacific, South China Sea, and the Mediterranean as well as the waters lying around the Southeast Asia region and to the south of African continent. The groups usually consist of at least two vessels, but are also occasionally accompanied by helicopter squadrons and submarines.

Late last year, Navy Commander Rear Admiral Hossein Khanzadi said, “The Leader stated, ‘Whenever the Navy was ready for ocean navigation, it should undertake the mission.”

The Iranian Navy is to sail its vessels close to the United States, which maintains ample naval presence in the Persian Gulf and in the region’s littoral states. Washington has threatened to bring “down to zero” Iran’s oil exports, which takes place through the Strait of Hormuz between the Persian Gulf and the Gulf of Oman.

The Islamic Republic has firmly warned that it will close the strait down if the US pushes ahead with its threat, vowing to respond in kind to any violations of international laws governing the strategic waterway, through which 30 percent of global oil flows.