TEHRAN, Jan 5 - Firefighters in Spain say that three people have been killed and more have been injured after a fire broke out in an apartment building in a town near Barcelona. 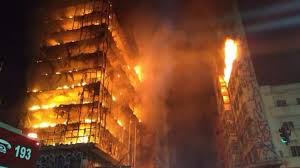 TEHRAN, Young Journalists Club (YJC) - Firefighters for the northeastern region of Catalonia say that the blaze on Saturday also left one baby in critical condition and two adults in serious condition. Another 13 people needed treatment.

The fire occurred in a 10-story apartment building in Badalona, a large town just north of Barcelona on the Mediterranean coast.

Firefighters say they have the flames under control. They have not said what caused the blaze.