TEHRAN, Jan 6 - Six passengers including two children were killed this morning when an overloaded double-decker bus flipped over on a motorway in heavy rain from Tropical Storm Pabuk. 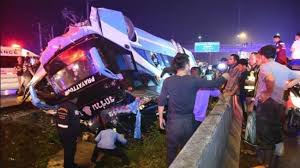 TEHRAN, Young Journalists Club (YJC) - The coach set off last night from Roi Et province in the north of Thailand to Bangkok in the middle when it encountered a rainstorm in the early hours of the morning.

Survivors told police that the bus was ''slipping'' on the wet surface of the road amidst heavy rain from the tail end of Tropical Storm Pabuk, which has wreaked devastation across the country since last Thursday. The bus spun out of control and landed upside down in the central reservation in Pathum Thani province at 3:30 a.m.

Rescue crews rushed to the scene where five passengers, including a baby boy and a young girl, were found dead inside the mangled wreckage. A sixth passenger later died in hospital.

Police are now questioning the driver on suspicion of ''negligence causing death and injury'' after paramedics said 54 passengers had been counted - nine more than the bus capacity of 45.

Witnesses also said that the bus driver had been tailgating other cars and should have been further back during the downpour.