TEHRAN, Jan 8 - An Afghan official says at least 2 civilians were killed when a bomb went off in eastern Khost province. 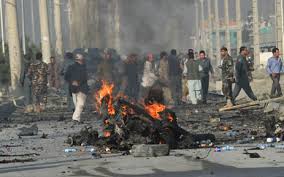 TEHRAN, Young Journalists Club (YJC) - Habib Shah Ansari, the provincial health director, also says that 23 people, mostly civilians, were wounded in the attack, which took place in the provincial capital, the city of Khost, on Tuesday.

Ansari says the explosives were placed inside a motorbike that was detonated by remote control.

The Taliban did not make any immediate statements on the bombing but the insurgents have been carrying out near-daily attacks targeting Afghan forces, including in Khost.

The violence comes despite stepped-up efforts by the United States to find a negotiated end to the country's 17-year war.