Emergency declaration in US for Trump’s border wall still on table: White House

TEHRAN, Jan 9 - US President Donald Trump may still declare a national emergency in the country to go solo in building a wall on the southern border without a green light from Congress, the White House says. 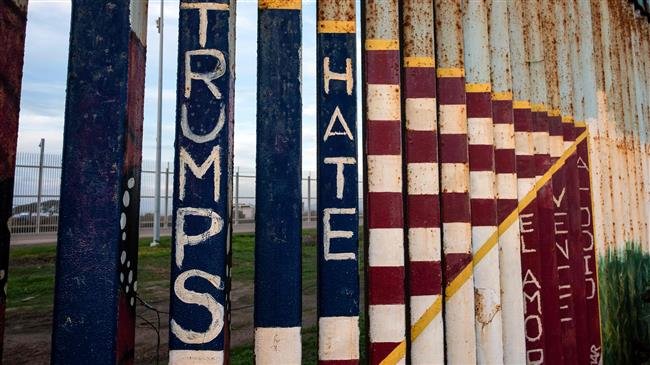 TEHRAN, Young Journalists Club (YJC) - During a prime time address to the nation Tuesday night, Trump refused to mention the possibility of declaring a national emergency although he had threatened to do so.

But White House press secretary Sarah Sanders told Fox News on Wednesday that the declaration is “certainly still an option” and “something that’s on the table.”

“We’re hopeful, again, that they get serious about doing their jobs and work with us to accomplish these things,” Sanders said.

Funding for the wall has been has led to a budget impasse, causing the ongoing partial government shutdown despite several rounds of negotiations with Democrats.

Trump demands over $5 billion, for which he is "proud" to have shut down the government but Democrats are not offering more than $1.3 billion.

“Sadly, what President Trump is trying to do is create fear and hatred in our country," said Vermont Democratic Senator Bernie Sanders of Trump’s prime time speech. "Instead of trying to bring us together as a people, he is trying to divide us up. And in the process, divert our attention from the real crises facing the working families of this nation.”

A frequent critic of Trump's, Sanders added that the president "lies all of the time," and his latest speech is no different.

“It gives me no pleasure to tell you what most of you already know, and that is that President Trump lies all of the time," Sanders said. "And in his remarks tonight and in recent weeks regarding immigration and the wall, he continues to lie.”

Trump has been calling for a wall along the southern border since his 2016 presidential campaign, pledging that Mexico would pay for it.

“In terms of immigration in this country, what we need to do is not to waste billions of dollars on a wall, but to finally the address the need for comprehensive immigration reform, including improved border security," Sanders said.

There were also those who voiced support for Trump’s agenda, including Oklahoma Republican Senator James Lankford.

Share to
Related News
US government’s assessments contradict Trump’s border security claim
It’s shame that Trump puts up with his insubordinate staff: Ron Paul
US sanctions on Iran not to last long: VP
Tags
us ، people ، trump
Your Comment