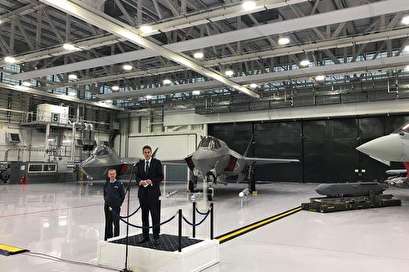 "The incredible F-35 jets are ready for operations, a transformed Typhoon [a fighter plane about to go out of service] has the power to dominate the skies into the 2040s, and we continue to look even further into an ambitious future," Defense Secretary Gavin Williamson said on Thursday as he visited the Royal Air Force base in Marnham, England.

He added that the short-take-off, vertical-landing versions of the Lockheed-Martin-built F-35 are ready for overseas deployment.

Seventeen more will be built for the British military in the $700 million contract, and the government is committed to purchasing 138 more in the next 30 years.

The planes unveiled on Thursday will be sent to the RAF base in Akotiri, Cyprus, Sky News reported, and could be used in strike missions against the Islamic State in Iraq and Syria this year.

Flight trials of the F-35B had been underway since last year, with tests aboard the HMS Queen Elizabeth, Britain's newest aircraft carrier.

"I am proud to confirm that the RAF's Combat Air capability has taken yet another significant step towards the realization of our Next Generation Air Force," said Chief of the Air Staff Air Chief Marshal Sir Stephen Hillier. "With its cutting-edge stealth technology, our F-35s are now ready to deploy on operations and, alongside our combat-proven Typhoon, offer a step-change in our ability to employ air power around the world."

The F-35s are set to work with the Britain's fleet of Typhoon aircraft, which Williamson said have been fitted with a new weapons suite said to "vastly increase its capability." Included among the new weapons are the deep strike cruise missile Storm Shadow, air-to-air missile Meteor and the precision attack missile Brimstone.

Williamson also showed off the Tempest, a concept model for a future U.K. fighter which the Ministry of Defense hopes to make a decision on by 2025 and have operational by 2035.