TEHRAN, Jan 12 - Thousands of Colombians have taken to the streets in several major cities across the South American country, demanding the resignation of Attorney General Nestor Humberto Martinez, who is accused of not probing graft cases he was aware of. 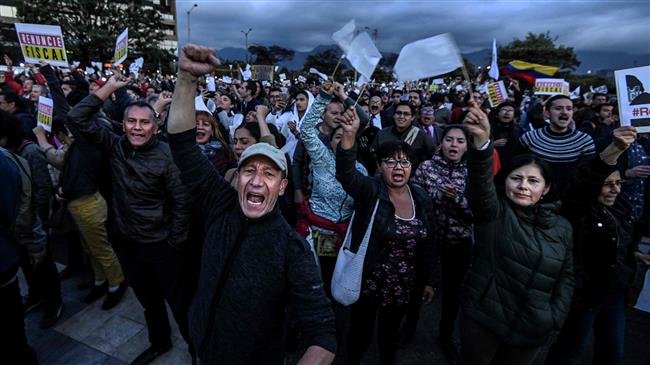 TEHRAN, Young Journalists Club (YJC) -The protest rallies were held on Friday as angry demonstrators marched on prosecutors’ offices in the capital Bogota, Cali, Barranquilla, Bucaramanga and other cities, according to a report by Colombian broadcaster Caracol.

In the capital, protesters convened outside Martinez’s office, carrying flashlights to “shine a light” on what they called Colombia’s corrupt institutions.

Martinez, 64, has been accused of withholding information about the country’s links to Brazilian construction giant Odebrecht, which is widely implicated in a far-reaching corruption scandal, described as one of the biggest transnational corruption scandals in Latin America’s recent history.

“The behavior of prosecutor Martinez ... is destroying trust in state institutions,” said Pedro Pablo Salaz, one of the organizers of a rally in the northern city of Tunja.

Odebrecht is currently under investigation by the attorney general’s office for purportedly offering bribes as much as $800 million to politicians in 10 different countries across Latin America in return for receiving contracts, as the colossal company has admitted.

Martinez, who is currently in charge of investigating Odebrecht’s activities in his country, previously worked as a legal adviser to the Brazilian conglomerate.

Furthermore, suspicions of a purported cover-up increased after two key witnesses, one of them an internal auditor, in the case died in suspicious circumstances.