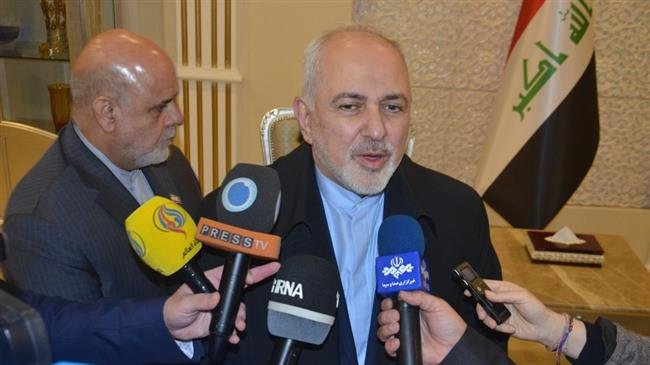 TEHRAN, Young Journalists Club (YJC) - "After [achieving] victory against Daesh, some countries, including the US, have created certain problems in the way of the two countries' cooperation, but fortunately, they were defused thanks to the wisdom of the two countries' officials," Zarif told reporters upon his arrival in the Iraqi capital of Baghdad on Sunday.

Iran's top diplomat praised the Iraqi government's positive stance on unilateral sanctions imposed by the United States against the Iranian nation and noted that he plans to hold talks with senior officials of the Arab country about ways to further boost cooperation.

Zarif called the US a "losing horse" and recommended countries not to lay bet on a losing horse.

"The US has faced failure over the past 40 years in its policies against the Iranian people," Zarif said.

The Iranian foreign minister also noted that he would attend three trade meetings between the economic agents of the two countries’ private sectors in the Iraqi cities of Baghdad, Karbala and Sulaymaniyah.

Heading a high-ranking politico-economic delegation, Zarif arrived in Baghdad on Sunday on a four-day visit.

Back in November, Iraqi President Barham Salih paid a two-day visit to Tehran at the head of a delegation at a sensitive time when the US was pressuring regional countries to go along with Washington in “squeezing” Iran under the sanctions re-imposed on the Islamic Republic.

In a post on his official Twitter account, Zarif expressed delight at the visit by the Iraqi president and his accompanying delegation, saying Iran and Iraq were committed to win-win cooperation.

"Constructive exchanges on next steps to work together towards regional peace & security," Zarif said.