TEHRAN, Jan 14 - A UK member of parliament, who helped enforce discipline in Prime Minister Theresa May’s Conservative Party, has resigned over her Brexit deal with the European Union which faces a crucial vote in parliament on Tuesday. 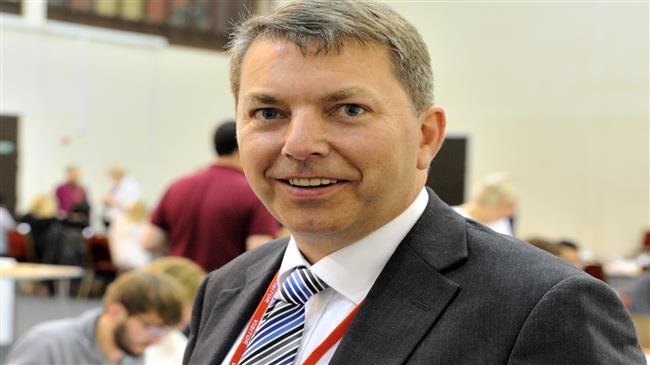 TEHRAN, Young Journalists Club (YJC) - Gareth Johnson, who served as a Tory whip, submitted his resignation to May on Monday, saying he had failed in his mission to try to convince lawmakers to back May's Brexit agreement.

“Over the last few weeks, I have tried to reconcile my duties as a Whip to assist the Government to implement the European Withdrawal Agreement, with my own personal objection to the agreement,” said Johnson in a resignation letter to May.

The Tory lawmaker said May’s Brexit deal, which many believe would suffer an outright defeat in the House of Commons in a vote on Tuesday, “would be detrimental to our nation’s interests.”

The resignation came as May warned lawmakers again to approve the Brexit deal or face more political and economic uncertainty.

In a speech to workers of a factory in Stoke-on-Trent, an area in central England known for its fierce anti-EU sentiments, May said that Brexit would be derailed if the Commons rejected her agreement.

“There are some in Westminster (parliament) who would wish to delay or even stop Brexit and who will use every device available to them to do so,” May said.

May has earlier indicated that even if the parliament voted down her Brexit deal, she would go ahead with plans to bring Britain out of the EU on March 29, 2019 in a disorderly manner.

However, she said Monday that recent developments in the Commons meant that a cancellation of Brexit was a likelier scenario than the no-deal Brexit.

“While no-deal remains a serious risk, having observed the events at Westminster over the last seven days, it’s now my judgment that the more likely outcome is a paralysis in parliament that risks there being no Brexit,” she said.

Share to
Related News
Fresh EU talks possible if UK parliament rejects Brexit deal: Germany
Brexit is in peril, UK PM May warns ahead of vote on her deal
Ahead of vote, UK PM May warns it would be catastrophic to halt Brexit
Tory rebels plot to seize control of Brexit from PM: Report
Tags
uk ، people ، brexit
Your Comment