TEHRAN, Jan 14 -Israeli police forces have prevented hundreds of Muslim worshipers from saying their prayers in the Dome of the Rock mosque, which is located inside the al-Aqsa Mosque compound in the occupied Old City of East Jerusalem al-Quds. 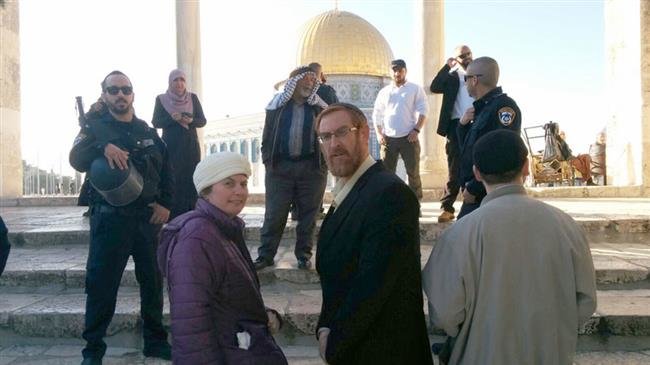 TEHRAN, Young Journalists Club (YJC) -The Palestinian Ma'an news agency further reported on Monday that Israeli troops were heavily deployed in all over the compound as Muslim worshipers, after being barred from entering the holy site, gathered in one place to perform prayers together outside of the Dome of the Rock.

The report, citing Firas al-Dibs, spokesperson of the Islamic Waqf (Endowment) organization, as saying that Israeli police forces also prevented a group of imams and sheikhs from entering the site.

He added that the Israeli forces also assaulted Sheikh Omar al-Kiswani, director of the Al-Aqsa Mosque, without giving more details.

The al-Aqsa Mosque compound sits just above the Western Wall plaza and houses both the Dome of the Rock and the al-Aqsa mosque.

Tensions continue in the occupied Palestinian territories as part of the aftermath of US President Donald Trump's recognition of Jerusalem al-Quds as Israel’s "capital" and relocation of the US embassy to the occupied city.

On December 21, 2017, the United Nations General Assembly overwhelmingly voted in favor of a resolution that calls on the US to withdraw its controversial policy shift.

Despite the vote, the US went ahead with the embassy transfer on May 14, triggering demonstrations in the occupied Palestinian territories, Iran, Turkey, Egypt, Jordan, Tunisia, Algeria, Iraq, Morocco and other Muslim countries.

Infuriated by Trump’s move, Palestinian President Mahmoud Abbas boycotted his administration, saying Washington is no longer qualified to serve as the sole mediator in the decades-long conflict with Israel, and that an international mechanism should be devised to replace the US in the so-called peace process.