TEHRAN, Jan 19 -China will "soon" begin the construction of two hyper-gravity centrifuges that, once complected, will dethrone their American counterpart as world's largest centrifuges in terms of capacity, a new report has revealed. 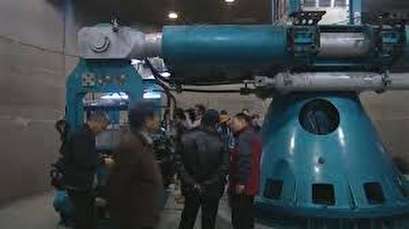 TEHRAN, Young Journalists Club (YJC) -China will "soon" begin the construction of two hyper-gravity centrifuges that, once complected, will dethrone their American counterpart as world's largest centrifuges in terms of capacity, a new report has revealed.

The report by Reuters on Sunday came after Beijing's recent approval of a feasibility study report by the country's National Development and Reform Commission (NDRC).

One of the two centrifuges will be designed to have a capacity of up to 1,500 gravity tons (gt), which makes it far more powerful than the current record holder, a 1,200-gt centrifuge developed by US Army Corps of Engineers.

The other planned centrifuges will give researchers access to gravity levels of up to 600 times that of the Earth.

The project, which is estimated to cost more than 300 million dollars, will be centered in China's eastern city of Hangzhou and is expected to be completed in five years.

Reports also indicated that the development of the new devices will be based on a two-arm, nine-meter-diameter centrifuge that has been in operation at China’s Zhejiang University.

Chen Yunmin, an engineering professor with Zhejiang University and also an academician at the Chinese Academy of Sciences (CAS), is in charge of supervising the major project.

"The centrifuges will provide strong support to research in areas such as underground and deep-sea exploration, disaster control, waste disposal, and new material manufacturing," Chen said.

The Chinese engineering professor added that hyper-gravity would enable scientists to simulate a deep-sea environment thousands of meters below the sea level, in which they can easily test the mining of natural gas hydrate or combustible ice.

The groundbreaking research project comes as the United States – China’s strategic competitor and rival – has for long viewed Beijing’s rise on the global stage as a threat.

According to a recent survey conducted by Pew Research Center, seventy-two percent of Americans believe China plays a more important role in global affairs today than it did 10 years ago.

Forty-three percent of respondents said China, which has recently experienced a steady growth in terms of global influence, had gained more respect in the world while respect for the US had diminished over the same period.

Beijing and Washington have been engaged in an intensifying trade war that US President Donald Trump launched last summer to help reduce his country's massive trade deficit with China.

The two countries agreed to a truce on the sidelines of the G20 summit in Buenos Aires in December 2018. Talks between the two sides have shown signs of progress but a lasting deal  remains elusive.

The US has also been taking sides with several of China’s neighboring countries in their territorial dispute in the South China Sea, accusing China of undertaking a land reclamation program by building artificial islands in the disputed waters.

Beijing asserts its sovereignty over nearly all of the contested sea, which serves as a crossing for more $5 trillion worth of maritime trade annually. The US military has been challenging those claims by conducting aerial and maritime passes aimed at protecting what it calls "freedom of navigation" in the region.