Gabbard says not regret her meeting with Syria's Assad

TEHRAN, Young Journalists Club (YJC) - Tulsi Gabbard, a veteran of Iraq war an a candidate of 2020 US presidency was largely criticized by Democrats and Republicans for her unannounced meeting with Syrian President Basshar al-Assad in 2017. 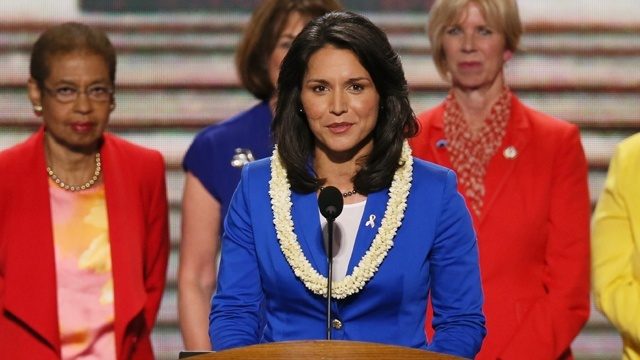 TEHRAN, Young Journalists Club (YJC) - Tulsi Gabbard, who announced earlier this month she would run for president in 2020 has defended her decision to meet with Syrian President Bashar al-Assad two years ago, which was a “fact-finding” trip to the Mideast country.

Speaking on Sunday with CNN’s Jake Tapper on “State of the Union”, the Democratic Rep. said she didn’t regret having met Assad.

“I think that it is, it continues to be very important for any leader in this country to be willing to meet with others, whether they be friends or adversaries or potential adversaries if we are serious about the pursuit of peace and securing our country”, Gabbard told Tapper.

Gabbard, an Iraq war veteran, explained that she had witnessed the plight of the Middle East firsthand and the cost of war:

“You know, Jake, you – you often acknowledge and bring to the forefront the cost of war and our troops and who pays the price. And, as a veteran, you know I have been serving in the Army National Guard now for 15 years and continue to serve, served on two Middle East deployments. I have seen this cost of war firsthand, which is why I fight so hard for peace. And that’s the reality of the situation that we’re facing here”.

Gabbard’s stance on the Syrian president remained unchanged, with her recent comments echoing another interview with Tapper, soon after meeting Assad in 2017:

Nearly two weeks ago, Gabbard drew an avalanche of criticism over her view about US involvement in Syria, the 2017 meeting with Assad and LGBTQ+ rights after announcing she would be running for the White House in 2020.

Two years ago, she made an unexpected “fact-finding” trip to Syria and held a meeting with Assad.