TEHRAN, Jan 26 -"The magnitude of warming is so high that everything is melting everywhere now," researcher Simon Pendleton said. "We haven't seen anything as pronounced as this before." 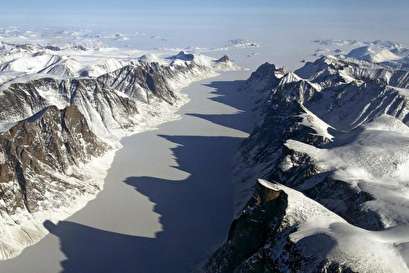 TEHRAN, Young Journalists Club (YJC) -Rapidly retreating Arctic glaciers have revealed ancient moss and lichens, ice-free for the first in 40,000 years, according to new analysis by researchers at the University of Colorado, Boulder.

The survey of newly thawed plants, contextualized by temperature records gleaned from Greenland ice cores, suggests the Arctic is experiencing summer highs warmer than any century in 115,000 years.

"The Arctic is currently warming two to three times faster than the rest of the globe, so naturally, glaciers and ice caps are going to react faster," Simon Pendleton, doctoral researcher at Boulder's Institute of Arctic and Alpine Research, said in a news release.

Pendleton and his colleagues radiocarbon dated plants found near the edges of 30 ice caps on Baffin Island, the fifth-largest island in the world.

"We travel to the retreating ice margins, sample newly exposed plants preserved on these ancient landscapes and carbon date the plants to get a sense of when the ice last advanced over that location," Pendleton said. "Because dead plants are efficiently removed from the landscape, the radiocarbon age of rooted plants define the last time summers were as warm, on average, as those of the past century."

Their analysis -- published this week in the journal Nature Communications -- showed all but one of the 30 locations were continuously covered by ice during at least the last 40,000 years.

Glaciers consistently reposed to warming and cooling patterns, making them an ideal proxy for historic climate change. When viewed in context of temperature data revealed by ice cores in Greenland, the latest plant analysis suggests the region is experiencing its warmest summers in 115 millennia.

If the warming trends continue, scientists warn Baffin Island is likely to be entirely ice-free within a few centuries.

Under normal cooling and warming patterns, scientists would expect to find a wider range of plant ages, with some areas having previously melted and others remaining frozen.

"A high elevation location might hold onto its ice longer, for example," Pendleton said. "But the magnitude of warming is so high that everything is melting everywhere now. We haven't seen anything as pronounced as this before."