TEHRAN, Jan 28 - British Prime Minister Theresa May intends to give parliament a second chance to approve a Brexit deal as soon as possible, her spokesman said on Monday, adding that negotiations to change the deal so it can win lawmakers' support were ongoing. 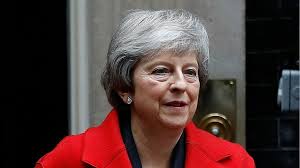 TEHRAN, Young Journalists Club (YJC) - The spokesman said he could not imagine any circumstances under which parliament would not be given another chance to vote on approving a Brexit deal, and restated that May is committed to leaving the European Union on March 29.