TEHRAN, Jan 29 -"This is a real victory for little projects. Our team had less than 0.3 percent of the budget of large international projects," said lead researcher Ko Arimatsu. 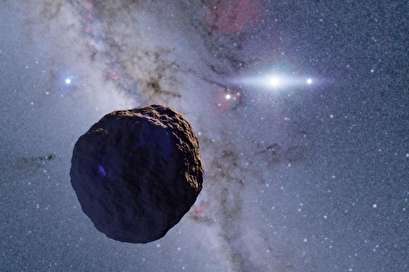 TEHRAN, Young Journalists Club (YJC) -Astronomers have for the first time identified a kilometer-sized object at the edge of the solar system.

According to a new study published in the journal Nature Astronomy, the distant object, boasting a radius of 1.3 kilometers, provides a missing link in planetary evolution.

For 70 years, planetary scientists have theorized the existence of small Kuiper belt objects. Researchers contend such objects were essential to the formation of the solar systems first planets, representing a missing link in planetary evolution.

The inner portion of the Kuiper belt is mostly made of up asteroids. This more active region has been disturbed by collisions and solar radiation. The most distant portion, called the Edgeworth-Kuiper belt, is more pristine. It's colder, less affected by radiation and home to fewer collisions.

Though long theorized to exist, kilometer-sized Kuiper belt objects are too faint to spot directly with even the most powerful telescopes. To find one, scientists used two small telescopes to locate instances of occultation, the shadowy signature left as the object passes in front of distant stars.

Researchers at the National Astronomical Observatory of Japan recruited citizen scientists to help them analyze images collected by the survey. The telescopes monitored 2,000 stars for a total of 60 hours.

Sure enough, researchers were able to locate a dimming pattern created by an Edgeworth-Kuiper belt object with a radius of 1.3 km.

"This is a real victory for little projects. Our team had less than 0.3 percent of the budget of large international projects," lead researcher Ko Arimatsu said in a news release. "We didn't even have enough money to build a second dome to protect our second telescope!"

"Yet we still managed to make a discovery that is impossible for the big projects," said Arimatsu. "Now that we know our system works, we will investigate the Edgeworth-Kuiper belt in more detail. We also have our sights set on the still undiscovered Oort Cloud out beyond that."

NASA's New Horizons mission -- a much bigger, better-financed project -- recently visited a much larger Kuiper belt object. Scientists hope data collected by the probe will provide new insights into the first stages of planet formation in the earliest days of the solar system.

"Everything that we're going to learn about Ultima -- from its composition to its geology, to how it was originally assembled, whether it has satellites and an atmosphere, and that kind of thing -- is going to teach us about the original formation conditions in the Solar System that all the other objects we've gone out and orbited, flown by and landed on can't tell us because they're either large and evolve, or they are warm," Alan Stern, principal investigator on the mission and a planetary scientist at the Southwest Research Institute in Boulder, Colorado, said during a press conference earlier this month. "Ultima is unique."