TEHRAN, Jan 29 -Companies like Walmart and GM want wind to power some operations in the years ahead. 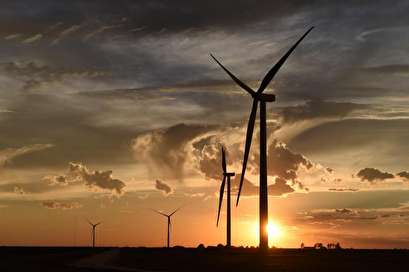 TEHRAN, Young Journalists Club (YJC) -For decades, Texas has been known for big oil. Now, greener energy production is growing at such a fast rate that several major U.S. companies are lining up for the clean power.

The wind industry is scrambling to get as many turbine farms up and running in the next two years before the federal government phases out a key tax credit.

Dallas-based Tri Global Energy is working to finish 478 megawatts of new wind power by this summer, giving the company a portfolio of nearly 2,000 megawatts of wind power.

The majority of that power is located in West Texas, where CEO John Billingsley Jr. grew up. Government subsidies have helped the industry grow to the point where the cost of wind power is on par with natural gas. The subsidy will be phased out to 80 percent in 2021, and the other 20 percent will be shaved off each year until it's gone in 2025 -- spurring Billingsley to get his firm's projects up and running by then.

"Everybody has gotten prepared for it so I don't think it's going to really affect us," Billingsley told UPI. "It's affecting us all the same way."

He said technology has improved turbine efficiency, which helps the industry's economic viability as the tax credits expire.

The wind power industry has taken off in Texas -- and, by extension, the United States -- in recent years. Texas wind farms produced 69 million megawatt hours in 2018, nearly 20 percent of the energy in the Electric Reliability Council of Texas grid, which covers 90 percent of the state. In 2016, turbines produced less than half that amount. During that time, Texas coal plants have gone from supplying 37 percent to less than a quarter of the state's power portfolio.

Tri Global, which has nearly 60 percent of the total megawatts under development in the state, has been Texas' top wind producer for 16 straight quarters. Its success comes from getting the entire rural community to buy in to the project -- including land owners, even those who won't have turbines on their land, who as equity partners get a piece of the wind royalty.

"That's the impetus that makes us so successful in West Texas and in the Texas Panhandle area," Billingsley said.

Wind companies conduct wind simulations and studies to determine the ideal spot for turbines and the ideal orientation and size for each generator.

Several major U.S. corporations are getting in on the wind revolution. More producers are building projects on behalf of giants like Wal-Mart, General Motors, Facebook and Google through power purchase agreements. Data and distribution centers offset their carbon footprint by buying into wind farms, getting access to cheap and renewable energy and creating a positive company image.

A Facebook data center in Fort Worth has an agreement with a 200-megawatt wind farm in Clay County, about 90 miles away. Alterra Power Corp's 17,000-acre site says it will produce more energy than Facebook will need in the foreseeable future.

Tri Global also has created a subsidiary called Sunfinities Renewable Energy that's dedicated to solar power, with a division that installs panels on rooftops and one that puts panels in remote locations. The company is building a 200-megawatt project in Scurry County, Texas, that could be operating next year.

The advancements have some Texas cities making power purchase agreements, including Austin and San Antonio.

The cost of solar power still has a long way to go before it's comparable with wind power, but Billingsley said the future of both looks bright. He envisions solar and wind working in concert -- whereas wind blows harder at night and solar works best during the hottest part of the day.

"We're very bullish on the prognosis of wind and our solar and that will come into play more and more for the next 5 to 10 or 15 years," he said. "Everywhere you look, there's stages and cities dedicating themselves to renewable energy and wind."

Tri Global is also keeping an eye on utility scale battery technology, which could be used to store the energy created by wind farms and solar panels for use when demand is higher. Wind often produces more energy than is needed in the night-time hours, which lowers costs.

Batteries on that scale, however, are basically cost prohibitive.

"Batteries are where solar cells were," Tri Global President Tom Carbone said. "You may find yourself running models to see at what price point does this make sense to store at night and dispense during the day. As a company, we're watching it pretty closely and modifying our financial models."