TEHRAN, Jan 29 - Police cleared 300 migrants from a makeshift refugee camp by Porte de la Chapelle in northern Paris early on Tuesday, and took them to official shelters elsewhere in the city. 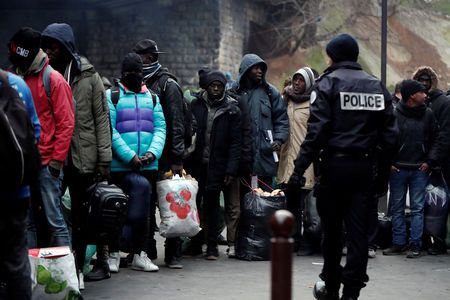 TEHRAN, Young Journalists Club (YJC) - The migrants had been living in tents under a bridge next to the "Peripherique" ring road that circles the city's 20 districts, and consented to being moved.

The refugees, who were mainly from Africa and Afghanistan, packed up their tents and belongings and boarded coaches.

"They will get a medical check, and then we will be looking at their administrative situation and according to their rights, they will be sent to centers," said local official Bruno Andre.

France has repeatedly cleared migrant camps in Paris and along its northern coast.

In late October 2016, France razed a sprawling migrant camp outside the port of Calais that served as a launch pad for refugees seeking to enter Britain hidden in trucks, trains and ferries.

The numbers trying to reach Britain increased sharply last year compared with 2017 but remained a tiny fraction of those attempting to reach European Union territory by crossing the Mediterranean from northern Africa and Turkey.

French authorities say they take a tough approach to discourage people from returning to the northern coast.

Europe has faced a migrant crisis since 2015 following wars in Libya and Syria, and more than 1 million people from Africa and the Middle East have tried to reach the continent via Turkey or by sea.