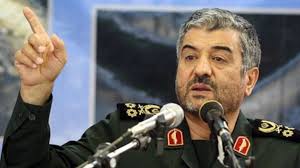 TEHRAN, Young Journalists Club (YJC) - Heading a ranking military delegation, the IRGC commander traveled to a region known as “Nazea’t” in the Persian Gulf on Wednesday.

Accompanied by IRGC Navy Commander Rear Admiral Ali Reza Tangsiri and other top generals, Major General Jafari visited the island of Abu Musa to assess the readiness level of the military forces and their equipment stationed on the island.

During the visit, the IRGC chief described Abu Musa as the “beating heart” of Iran, saying the troops on the island are courageously defending the island and protecting its security.

He further reminded the enemies that the Iranian southern islands scattered in the Nazea’t maritime region are all indispensable parts of the Iranian territory that are being vigorously safeguarded by Iranian forces.

The IRGC will keep boosting capabilities, defense preparedness, and intelligence dominance across the Nazea’t region, particularly in Abu Musa, the general underlined.

He also slammed the provocative moves by some neighbors of Iran to create division as a futile plot hatched by trans-regional states, adding, “Today, our friendly and neighborly nations and governments have realized that the Islamic Republic of Iran is their genuine brother and companion, and that the security of the Strait of Hormuz in the Persian Gulf waters would be ensured only by the regional countries.”

“The Islamic Republic of Iran plays a significant and leading role in establishing such security (in the Persian Gulf),” the top IRGC general concluded.

In remarks in 2016, Ayatollah Khamenei underlined that security of the Persian Gulf region comes within the purview of the regional countries alone, and dismissed the US claim of seeking security in the region.

Ayatollah Khamenei has also called for the enhancement of the Iranian naval forces’ presence in international waters and expanding the Navy’s power in balance with the merit of the Islamic Establishment.