TEHRAN, Jan 30 -A woman running in a Thailand marathon came across a lost puppy and ended up carrying the dog while running the last 19 miles of the race. 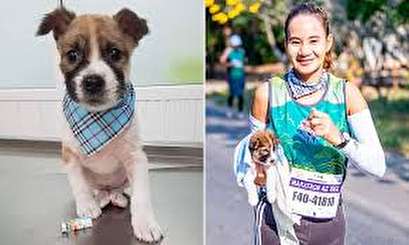 TEHRAN, Young Journalists Club (YJC) -Khemjira Klongsanun, 43, said she was 7 miles into the Chombueng Marathon in Ratchaburi when she noticed the runners ahead of her were size-stepping something in the road.

Klongsanun said she stopped and coaxed the young Thai wolf dog over to her, wrapping it in her towel to shield it from the sun.

''It seemed to me that this little guy was lost. There were no houses, no other dogs, or no people around. So, I picked up the puppy, if only to take him out of the unsafe environment," the runner said.

She carried the puppy 19 miles to the finish line and ended up adopting it. Klongsanun said she named the puppy Chombueng in honor of the marathon that brought them together.