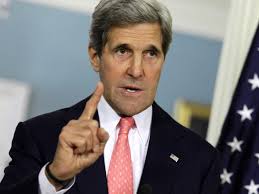 The top US diplomat has spent months trying to get the two sides to agree on a framework for resolving their decades-old conflict, but the negotiations have shown little sign of progress, with each side blaming the other.

A senior Palestinian official said Abbas would leave for France on Tuesday for the meeting, which he said had been requested by Kerry who is currently in Abu Dhabi.

"The Palestinian positions are known and we have reiterated them at all the meetings with Kerry and his advisers," the official said.

State Department spokeswoman Jen Psaki confirmed the meeting, saying they would "discuss the ongoing negotiations between the Palestinians and Israelis".

On Sunday, Abbas struck a conciliatory tone on two of the most divisive issues, saying he did not want to "flood Israel" with returning Palestinian refugees and that there was no need to "re-divide" Jerusalem.

Resolving the question of the right of return for Palestinian families who fled or were forced out of their homes during the war which accompanied Israel's independence in 1948 is one of the most bitterly disputed issues in the conflict.

Jerusalem is also deeply divisive, with Israel viewing the entire city as its "eternal, undivided" capital and the Palestinians demanding a capital in the mostly Arab eastern sector of the city captured by Israel in the 1967 war.

Abbas suggested Sunday there could be two municipalities in the city with a supervisory body to coordinate between them.

During his most recent visit to the region last month, Kerry presented both sides with a draft framework agreement addressing the so-called "final status issues" -- Jerusalem, the refugees, borders and security.