TEHRAN, Feb 13 - Indiana lawmakers are considering a bill that would require all high school students in the state to pass the United States citizenship test to graduate. 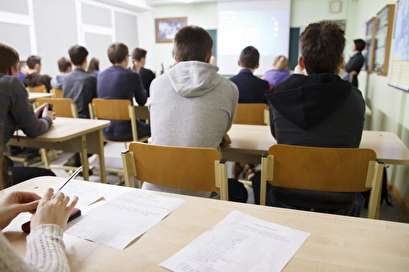 TEHRAN, Young Journalists Club (YJC)-This kind of legislation has become a growing trend in states across the country. At least 13 have enacted similar laws since 2015, including Arizona, North Dakota and Kentucky.

The impetus behind the proposed law, some elected officials said, are recent surveys of Americans -- especially young Americans -- that show a striking lack of knowledge about how the U.S. government functions.

A 2016 study by the University of Pennsylvania, for example, showed that only 26 percent of people could name all three branches of government. And nearly one-third could not name a single branch.

"I think we're losing out a generation of people," said Sen. Dennis Kruse, a Republican who drafted the Indiana bill. "We just don't have people with common knowledge of our government systems anymore -- and where we came from."

Kruse, who is 72, said he remembers civics being an important part of his elementary and high school education. But, at some point, it stopped being taught.

"Somehow, our people today are not getting it," he said.

The change started in the late 1990s, when improving science, math and technology education became the focus of legislators around the country, said Lucian Spataro, chief academic officer of the Joe Foss Institute of Scottsdale, Ariz., which promotes civics education.

By the early 2000s, engineering was added to the list, and those disciplines were given a name -- STEM. Around the same time, then-President George W. Bush's No Child Left Behind education reform made standardized testing a fixture in American education.

"The emphasis was on STEM and testing in those disciplines," Spataro said. "So, the money followed those tests. Over the decades, civics became secondary."

School rankings and even teachers' pay are based on the outcomes of the standardized STEM tests, Sparato added. Teachers have no choice but to prioritize those topics.

The Joe Foss Institute, and others like it, began pushing for civics education in 2014. And they support bills like the one now before Indiana lawmakers that require students sit for the same test immigrants take to become citizens.

For example, multiple-choice questions ask what Benjamin Franklin is famous for and what two rights in the Declaration of Independence are.

"Our goal is to shine a big bright light on civics and bring it back into schools so it's taught, funded and tested," Sparato said. "The citizenship test is a good place to start."

But though the statistics are hard to ignore, not everyone agrees that the citizenship test is the answer.

"I appreciate the sentiment, but one more test isn't going to solve this," said Teresa Meredith, the president of the Indiana State Teachers Association. "This problem is bigger than a citizenship test."

Meredith, who is a kindergarten teacher, said she agrees that civics education has fallen short because of the pressure on youngsters to pass standardized tests. But the solution, she said, is not another test.

"Instead of adding another test, what we really need to do is pull back on testing," Meredith said. "I learned all this in school because my teachers were able to teach with such joy. We need to get back to real, deep teaching, beyond what is needed to prepare for the test."

Others agree. The Indiana state Democrats said the bill "would do nothing beyond adding to the long list of exams that students already must pass to graduate." They also expressed concern that it would lower graduation rates for the state.