'Yellow Vests' rally in front of UN office in Geneva

TEHRAN, Feb 21 - Around a thousand 'Yellow Vest' protesters from France and Switzerland gathered in front of the United Nations office in Geneva to denounce the violence of the French police during Yellow Vest demonstrations. 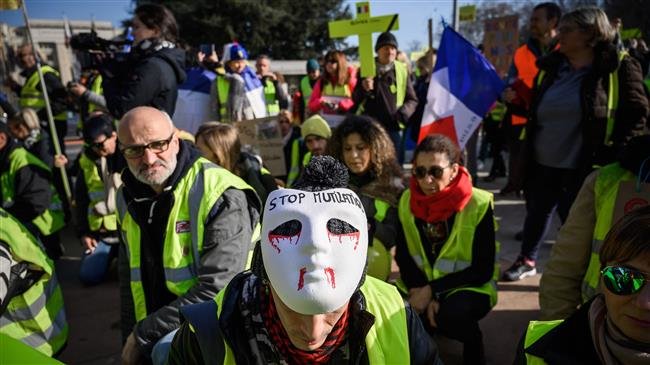 TEHRAN, Young Journalists Club (YJC) - Groups from different regions of France joined the rally at the Place des Nations. Organizers had prepared a dossier with all the names of the persons injured during the protests to deliver it to a UN official for study.

"For more than a month we have been working to build up a dossier with all the victims, the dead or the injured during the protests. The dossier is ready and we are lucky to be received by a representative of the UN. We are going to give him the dossier so he can study it with the aim of stopping all the violence coming from our Government," the rally organizer Nicolas Mollier said.

"We are here to ask for some help to the UN with this dossier. When you have French citizens that lose an eye during a protest, a hand removed, injuries and skulls fractured, we have to do something to stop it. This is the objective," he added.

A week ago, a group of UN independent experts voiced concern about the handling of the 'yellow vest' protests saying rights had been disproportionately curtailed and that some people may be discouraged from exercising their right to protest.