TEHRAN, Feb 25 - A Pakistani high court has demanded the details of government expenses for the two-day visit of Saudi Crown Prince Mohammad bin Salman and his 40-member delegation to Islamabad. 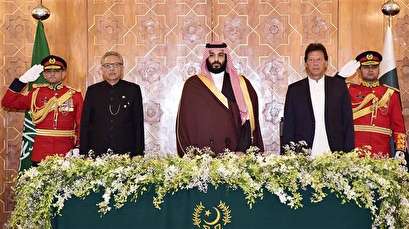 TEHRAN, Young Journalists Club (YJC) - The Lahore High Court was hearing a petition over the details of expenses incurred by Islamabad for the royal visit, Express News reported Monday.

Citing media reports, the petition said the government spent about 200 million rupees during the visit to cash-strapped Pakistan.

Escorted by Pakistan’s fighter jets, the fleet of bin Salman – known as MbS -- and his 1,000-strong entourage touched down in Islamabad on February 18 for a two-day visit.

The petition said that the government booked 300 luxury cars while the crown prince’s plane was escorted by JF-17 fighter jets as it entered Pakistani airspace.

It said that using the national exchequer to pay for a foreign dignitary’s state visit ran counter to Islamic laws and traditions.

Following the hearing, the high court issued a notice to the federal government and concerned departments, demanding a reply by March 19.

The royal announced $20 billion of investment in Pakistan.

Observers have warned that Riyadh could be using the investment to sway Islamabad’s decisions and stoke further regional tensions and rivalry.

They have criticized the sycophantic welcome in Islamabad as Saudi Arabia threw Pakistan an economic lifeline, warning that the aid could turn Islamabad into a client state of the kingdom.

The last time a Saudi royal paid a visit to Pakistan was in 2006, when then King Abdullah bin Abdulaziz traveled to the nuclear-armed nation.

Bin Salman’s visit came at the time of increasing pressure against the kingdom over the humanitarian crisis, which is caused by its four-year war on Yemen and the killing of dissident Saudi journalist Jamal Khashoggi in in Istanbul, Turkey last year.