TEHRAN, Feb 25 - "Being able to fully describe the molecular changes that are going on in memory is enormously appealing," researcher Daniel Merritt said. 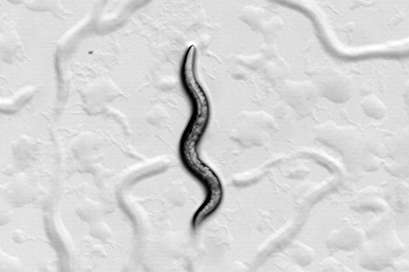 TEHRAN, Young Journalists Club (YJC) - The 302 nerve cells inside roundworms are helping scientists understand why some events or associations can't be remembered.

Memory blocking, or Kamin blocking, describes an animal's inability to replace an old memory cue with a new one if the new cue is presented at the same time as the old one.

"Suppose you grew up hearing ice cream trucks playing a song and hearing that song, even when you can't see the truck, makes you think of ice cream," Daniel Merritt, professor of molecular genetics at the University of Toronto, said in a news release. "One day, the ice cream truck owners decide to add a spinning green light to the roof of the truck, so that even people who are hard of hearing can see them. Kamin blocking predicts that you won't learn to associate spinning green lights with ice cream, because the ice cream truck song already fully predicts the delicious treat in store for you."

Psychologists have pointed to the Kamin blocking as evidence of the importance of novelty for the process of memory formation in humans.

While evidence of Kamin blocking can be observed externally among mammals, understanding its neurological underpinnings has proven especially difficult. Worms offer a simpler test model.

"Being able to fully describe the molecular changes that are going on in memory is enormously appealing, but human memory is too ephemeral and nebulous to pin it down," said Merritt. "But by studying it in worms, we are really making a lot of headway in figuring out exactly what is going on when memories are formed and retrieved in a molecule by molecule fashion."

Before Merritt and his colleagues could study Kamin blocking in worms, they had to confirm the simple roundworm experiences memory blocking.

The first cue prevented the formation of a second association.

Next, scientists used green fluorescent molecules to tag and highlight the expression of the EGL-4 protein expressed by a single olfactory nerve cell in the heads of the test subjects. EGL-4 is essential for benzaldehyde starvation learning.

When researchers repeated the experiments, they found the EGL-4 protein behaved the same way during benzaldehyde blocking as it did during normal learning.

"This is interesting because it contradicts the classic interpretation of blocking where you need an element of surprise or you don't bother remembering the second association," said Merritt. "Our data shows that the memory is formed but it's the expression of behavior that's suppressed somehow."

Scientists shared the latest findings in the journal Scientific Reports.

"That's the big question," said Merritt. "I'll let you know in four years' time when I'm done with my PhD."