Iran would not change independence, esteem for whole world

Tehran, YJC. Rouhani has addressed defense ministry and armed forces in a meeting with high-ranking officials. 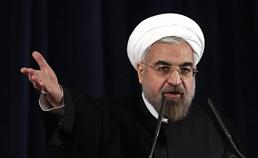 Hassan Rouhani met a number of high-ranking military officials and those of the Defense Ministry on Saturday.

"Defending national objectives is not the province of just one organization or one part of society. It is not just the armed forces which defend a country. Those working in diplomatic and foreign relation sections are also considered soldiers defending national interests,” the president asserted.

He further pointed out "Software is more important than hardware, but that doesn’t mean to lay down the hardware. The combination of the two is called smart power.”

Let the enemy know that we will not bargain on our independence, esteem, interests or values. That policy is a deterrent.”