TEHRAN, Feb 28 -British lawmakers have granted Prime Minister Theresa May a two-week reprieve, postponing their threatened rebellion aimed at blocking a no-deal Brexit after she agreed to a possible delay to Britain's departure from the EU. 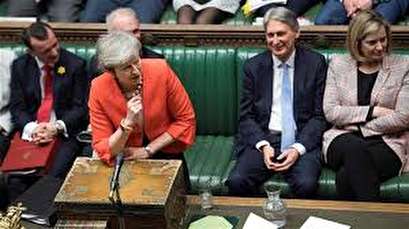 TEHRAN, Young Journalists Club (YJC) -Lawmakers Wednesday approved a three-step plan that would give the prime minister more time to renegotiate her deal with the European Union.

If May's bill fails, parliamentarians will vote on March 13 and 14 to decide whether to leave the EU without any deal on March 29 or postpone it to a later date.

Lawmakers overwhelmingly backed the proposal by 520 votes to 20 amendments put forward by former Labor Minister Yvette Cooper to tie May to the time frame.

MPs also voted against the opposition Labour Party's alternative Brexit plan. The amendment - which envisaged the UK joining a customs union with the EU - was defeated by 323 votes to 240. Following the defeat, the Labour announced it would now support a new public vote on Brexit, marking the first time that one of its main parties has backed giving voters a chance to change their minds since Britain voted in 2016 to leave the EU

After months of saying that Britain must leave the EU on time on March 29, May opened up the possibility on Tuesday of a limited extension to the exit date.

That was enough to avert a showdown in parliament on Wednesday with lawmakers -- including ministers in her own government, who had said they were prepared to join a rebellion this week to avert an exit with no agreement.

May's climb-down took much of the heat out of a series of votes on Wednesday that could have ripped control of the entire process away from the government.

In the end, lawmakers backed her promised timetable. But it now means British citizens and businesses will not learn how, or possibly even whether, they are to leave the European Union until the final weeks or even days before the deadline.

After a deal she negotiated with European leaders was rejected on January 15 in the biggest parliamentary defeat in modern British history, May is hoping to bring back a tweaked divorce accord for a vote, which could come as early as next week but may not take place until March 12.

May has now promised that if her deal is voted down, lawmakers will get a chance to vote on whether to leave with no deal, or to ask the European Union to delay the deadline.

French President Emmanuel Macron said on Wednesday that the EU would agree to extend the Brexit deadline beyond March 29 only if Britain justified such a request with a clear objective.

"If the British need more time, we would support an extension request if it was justified by new choices from the British," Macron told a joint briefing with Germany's Chancellor Angela Merkel in Paris. "But we would in no way accept an extension without a clear view on the objective pursued."

French officials have said Paris would agree to delay Brexit only if that came with a credible solution, for example if Britain called an election, held a second referendum, or presented a new plan that was acceptable to all sides but needed more time to be finalized.

Merkel said she was "totally on the same line" as Macron but appeared more willing to show flexibility.

"If Britain needs some more time, we won't refuse but we are striving for an orderly solution i.e. an orderly exit of Britain from the European Union," she said.