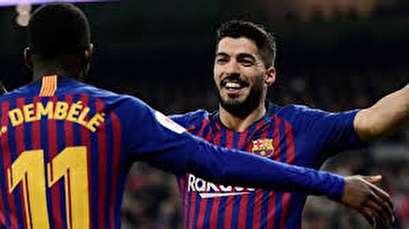 TEHRAN, Young Journalists Club (YJC) -Madrid were the better side for at least half of a wild Clasico at the Santiago Bernabeu but three goals conceded in 28 chaotic, second-half minutes sent Barca through to the final with a 3-0 victory, 4-1 on aggregate.

Suarez would have had a hat-trick had Raphael Varane not beaten him on the line to Ousmane Dembele's cross, Varane's own-goal coming between the Uruguayan's smart finish and a mischievously chipped penalty. He now has 11 goals in 13 games against Madrid.

"We have other players apart from Leo Messi that can score goals," Barca coach Ernesto Valverde said. "Luis' numbers are incredible, historic for Barca. We know he is always there."

By then, Barca were coasting and after thrashing Madrid 5-1 at the Camp Nou in October, they will return for Saturday's La Liga game boasting an accumulative score of 9-2 from the clubs' three meetings this season.

But this was not the humiliation of four months ago and if the result can be put to one side, Santiago Solari might take heart from the handful of golden opportunities his team wasted before their opponents began their spree.

"We are sad, we wanted to play in the final," Solari said.

"But we go out with our heads held high, we did everything we could but we didn't take our chances, and they did."

Vinicius Junior was most guilty, the 18-year-old showing his both his talent and youth in equal measure. Gareth Bale, left on the bench again, might have wondered what he would have done with some of the chances that went begging.

There was a scattering of whistles for Bale when he came on with just over 20 minutes left but there was little he could do about Barcelona quickly extending their lead from one goal to three.

For Valverde's side, a record sixth consecutive Copa del Rey final, with either Valencia or Real Betis, who play on Thursday, awaiting them on May 25.

After beating Sevilla 4-2 on Sunday, the Catalans appear to have rediscovered their groove. "It was a complete performance," said Suarez. "We knew it would have to be."

The first half was a scrap, full of heavy touches and lunging challenges with a handful of chances to counter-attack squandered by loose passes.