Japan hopes for peaceful settlement of Ukraine's crisis, Japanese Prime Minister Shinzo Abe has told a meeting of the cabinet and ruling parties. 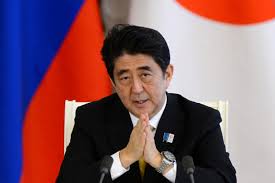 "Japan very much hopes that the situation in Ukraine will be settled by peaceful means," he said on Monday, adding that Tokyo "expects that all interested parties demonstrate restraint, responsibility, observance of international agreements and respect for Ukraine's sovereignty and territorial integrity."
Japan supported a decision by heads of seven leading industrialized countries to suspend participation in preparations for the G8 summit in Russia's Black Sea resort, Sochi.
"In the current situation we cannot expect fruitful discussions, even if we gather together," Chief Cabinet Secretary Yoshihide Suga told a news conference on Monday.
At the same time well-informed sources in Tokyo said the Japanese government would like to minimise damage from such steps to its relations with Russia that had been dynamically developing of late.