Tehran, YJC. Defense Ministry has delivered a large number of newly tested missiles to the IRGC and the Khatam ul Anbiya air base. 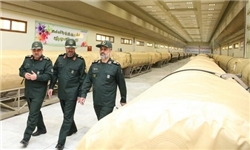 On Wednesday morning the minister of defense Hossein Dehqan officially delivered a large cargo of the defense industry’s newly produced missiles to the IRGC (Islamic Revolution Guardian Corps) and the Khatam ul Anbiya air defense base.
The missiles included Fateh, Zafar, Khalij Fars (Persian Gulf), Mersad, Qiam, Barani, and Qadr.
The defense minister stated that the missiles are able to cover an expansive spectrum of the country’s needs for missile and air defense.
He further added "The ballistic missile Qadr is a mid-range one, the Qiam has the ability to carry all kinds of blast warheads, and the Barani can destroy a range of targets.”
Dehqan maintained that the Fateh 110 is a super-modern ballistic missile which consumes fuel and one of the few in its kind which can pursue the target up to the hit.
Share to
Tags
irgc ، missile ، air ، defense
Your Comment