Tehran, YJC. Supreme Leader says to draw lines between oneself and one’s enemies does not mean to end ones relations with them. 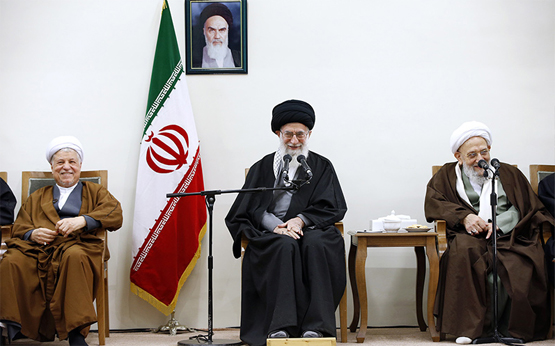 In a meeting with the members of the Assembly of Experts on Thursday, Iran’s Supreme Leader pointed to Iran’s foreign policy and said "Some make wrong interpretations and imply that to draw lines means to stop having relations with the world. On the contrary, drawing lines against the enemy’s front is much like geographical borders, clarifying our relations with the enemy.”

He urged Iranian statesmen to not fear the enemy and to trust in God, maintaining "The enemies of the Iranian nation are among the most infamous today. The US government is recognized as a vulgar player and a violator of human rights in the international arena. Inside the country also it is known as a lying, hypocrite regime. Currently Americans have the least trust in their government.”

"So one must not be afraid of such a disgraceful government,” he stated.

Khamenei also added that national integrity must be preserved in the form of sectarian and ethnic unity.

Also providing comments on the country’s cultural affairs he said "The government has to pay attention to the issue. Cultural officials must take care what they do, because one cannot be carefree about cultural issues.”