We do not trust enemy: Army chief

Tehran, YJC. Salehi has warned those inside the country who think “the enemy” is kind. 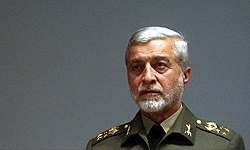 The commander of the Islamic Republic of Iran Army Major General Ataollah Salehi speaking in a conference with the Army’s clergy said "The enemy tries to prove to us that he is kind. There are some inside the country who fare on that path, whether knowingly or ignorantly. But our stance is completely clear; we do not trust the enemy.”
"Enemy is enemy and is not to be trusted,” he stated, adding "Arrogance always follows schemes. Right now by showing calmness it intends to make the nation abandon their revolutionary ideals.”
Salehi further asserted "We will never trust the enemy. We will act cautiously there and will not let down the Supreme Commander in Chief. So regarding military issues, we do not consider any kind of negligence or relaxation.”
Also pointing to the country’s cultural concerns as recently state by ayatollah Khamenei, he said "Efforts to meet the existing cultural concerns is a dire obligation for all organizations.”
Share to
Tags
army ، salehi ، culture
Your Comment