TEHRAN, YJC. Ghashogh-Zani is a part of the Charshanbeh-Suri, a special festival of fire traditionally held a few days before the Iranian New Year. 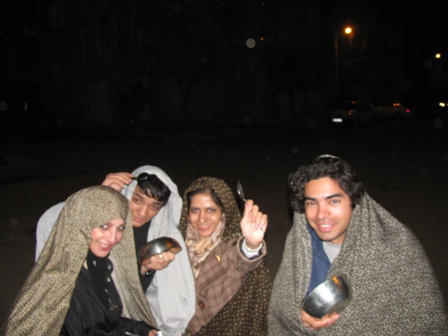 Ghashogh-Zani is a part of the Charshanbeh-Suri festival of fire which is held the last Wednesday of the year in Iran. The Western counterpart to it is the trick-or-treat performed on Halloween.
With the help of fire and light symbols of good, we hope to see our way through this unlucky night - the end of the year- to the arrival of springs longer days. Traditionally, it is believed that the living were visited by the spirits of their ancestors on the last day of the year. Many people specially children, wrap themselves in shrouds symbolically reenacting the visits. By the light of the bonfire, they run through the streets banging on pots and pans with spoons called Gashog-Zani to beat out the last unlucky Wednesday of the year, while they knock on doors to ask for treats. Indeed, Halloween is a Celtic variation of this night. 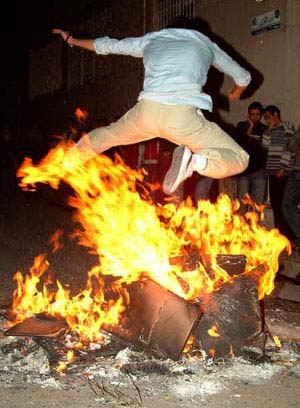 Chahārshanbe-Sūri (Persian: چهارشنبه‌سوری), pronounced Chārshanbe-Sūri (Persian: چارشنبه‌سوری) is the ancient Iranian festival dating at least back to 1700 BCE of the early Zoroastrian era. The festival of fire is a prelude to the ancient Norouz festival, which marks the arrival of spring and revival of nature. Chahrshanbeh Suri, is celebrated the last Tuesday night of the year. The word Chahar Shanbeh means Wednesday and Suri is red. The bon fires are lit at the sunset and the idea is to not let the sun set. Bon fires are lit to keep the sun alive till early hours of the morning. The celebration usually starts in the evening. On this occasion people make bon-fires on the streets and jump over them. The young shoot lots of fireworks before and during Chaharshanbe Suri (literally: Feast Wednesday). 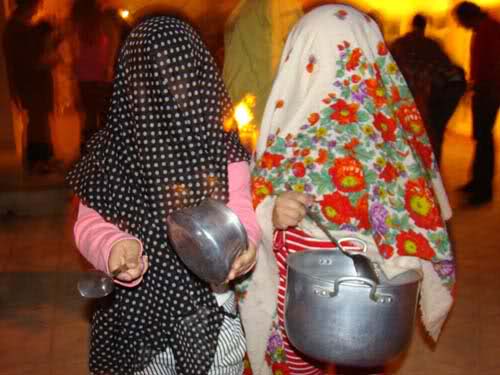 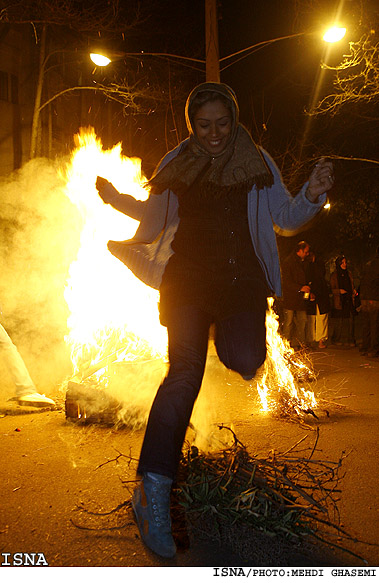 The tradition includes people going into the streets and alleys to make fires, and jump over them while singing the traditional song Sorkhi-ye to az man; Zardi-ye man az to. The literal translation is, Your fiery red color is mine, and my sickly yellow paleness is yours. This is a purification rite and 'suri' itself means red and fiery. Loosely translated, this means you want the fire to take your paleness, sickness, and problems and in turn give you redness, warmth,and energy. There is no religious significance attached to Chahar Shanbeh Suri and it serves as a cultural festival for all Iranian Jews, Muslems, Armenians, Turks and Zoroastrians alike. Indeed this celebration, in particular the significant role of fire, is likely to hail from Zoroastrianism. In addition another tradition of this day is to make a special Ajeel 'Mixed nuts and berries'. People wear disquise and chadors and go door to door knocking on doors. Receiving of the Ajeel is customary, as is receiving of a bucket of water. Iranians celebrated the last 10 days of the year in their annual obligation feast of all souls, Hamaspathmaedaya (Farvardigan or popularly Forodigan). They believed Faravahar, the guardian angels for humans and also the spirits of dead would come back for reunion. These spirits were entertained as honored guests in their old homes, and were bidden a formal ritual farewell at the dawn of the New Year. The ten-day festival also coincided with festivals celebrating the creation of fire and humans. In Sassanid period the festival was divided into two distinct pentads, known as the lesser and the greater Pentad, or Panji as it is called today. Gradually the belief developed that the 'Lesser Panji' belonged to the souls of children and those who died without sin, whereas 'Greater Panji' was truly for all souls.