Tehran, YJC. After meeting Iran’s political leaders, the EUHR headed to the historical city of Isfahan on a tourist visit. 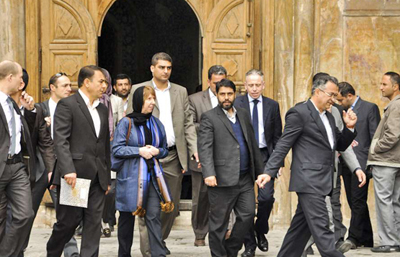 The High Representative of the Union for Foreign Affairs and Security Policy for the European Union Catherine Ashton who is in Iran for a number of visits to the country’s political leaders and activists, left Tehran for Isfahan late Sunday.

She then had her working lunch with the Isfahan Governor-General.

Mrs. Ashton then visited other historical sites of the city, including the Naqsh-e Jahan sq., Ali Qapu Palace, the Congregation Mosque, Sheikh Lotfollah Mosque, and the bazaar.

Baroness Ashton also visited the Vank Cathedral, Siosepol, Khaju Bridge and a number of other places before leaving for Tehran.